Kill, Baby…Kill, ‘Sometimes They Come Back’

What the hell is going on in Alabama?

That state has produced some of the most interesting surf-instrumental reverb minds around. One of the finest examples is 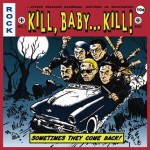 Kill, Baby…Kill, the five-fingers of death in music form. Their debut recording, the EP titled SOMETIMES THEY COME BACK, is five tracks of high voltage instro music. It’s not just power surf; the prefix ‘mega’ can be applied with absolute sincerity.

It’s after midnight and your backseat is glowing in the dark. Parts of you have taken a beating but the blood is dried and you’re sure you’ll make it another night. There’s a hitch-hiker riding shotgun and you’re not sure if you’re about to get knifed or fall in love. It doesn’t matter what car you’re in. Kill, Baby…Kill is playing on your radio.

Opening up is “Love Theme for a Twisted Mind,” a heavy swirl of emotion, deception and body-chemicals bouncing off the walls of your skull. It’s an explosion to start things off. There is no slow getting in. It’s head first or out.

The first time I heard it, the song “Psycho Beach party 3000” pissed me off. Honestly, I was angry because it was clear that Kill, Baby…Kill was a band that I would have to follow closely. Yes, you can get what you want and still be mad. Though, the anger was short lived. The guitar work on this song is impeccable.

My anger faded right about the time “Suppose The Doomsday Cults Were Right?” came on, a sentiment that seems more appropriate with the oncoming 5/22/11 hoo-hah. Of course, if they are right, I don’t have to worry about next month’s rent.

If you need a theme song for Zombie Awareness Month, “Hunting for the Dead” is not your song. If you need something to get your adrenaline pumping while you go out and return some bodies back to their graves, well. Kill, Baby…Kill has a song for you.

It’s pretty impressive how the five elements work together. “Turn Your Insides Out” has the two guitars of Brains and The Rev fighting in a gang war while Loose Grooves belts out some tricky organ sounds up front.  Shades and The Wolf work the drums and bass respectively as if they’re trying to summon forth the elder gods to consume the blight that is man off the face of earth. It’s pretty wicked.

The only fault is that it’s an EP. Given a wider canvas to experiment and work on, I see Kill, Baby…Kill really stretching and reaching into the bizarre world that the five of them inhabit. But this is that first taste and it packs a bite. This is Damn Good Music. It is no surprise that the band was invited to the recent Instro-Music Summit. These guys have what it takes and I’ll definitely be looking forward to what comes next from them.

You can find Kill, Baby…Kill on Facebook, MySpace and ReverbNation. You can purchase their EP over here (Definitely, support these guys.) 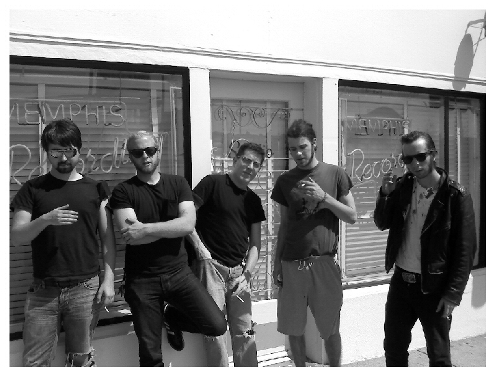