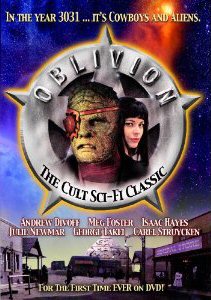 Given that May is Asian Heritage Month, I thought it would be appropriate to take another look at George Takei’s body of work. Based on my research, it appears that the subject of today’s review, the sci-fi western Oblivion, was the first non-Star Trek, non-TV science fiction movie that Mr. Takei had an onscreen role in. Given his many years of acting, it is both amazing and saddening to think that it took until 1994 for him to land such a role. Thankfully, this later led to several more appearance in future genre films. But let’s look at where it all began…

The year is 3031 and things are not looking good for the citizens of Oblivion. As if the planet’s variety of nasty alien creatures (like giant two tailed scorpions) weren’t bad enough, their sleepy little town has been taken over by a nasty reptilian outlaw named “Redeye” and his gang of cronies. Thanks to his personal stash of the valuable mineral Derconium, which interferes with electrical equipment, he has successfully both killed the marshal (by deactivating his personal force field) and rendered the cyborg deputy helpless. It’s up to the marashal’s estranged son Zack and his native friend Buteo to save the day. The thing is, Zack is an empath who can feel the pain of anyone he hurts or kills, which makes him reluctant to go in guns a blazin’. But as the level of violence escalates in Oblivion, it becomes harder and harder for him to just stand by…

Oblivion is a treat, from the futuristic western designs (with ATMs standing in for banks and electronic prospecting equipment) to the creature effects by the late David Allen. Co-producer/screenplay writer Peter David’s well-known lightheartedness comes into play several times in the film, including an amusing “bingo funeral” sequence and a blatant Man-Thing reference. It’s also fun spotting the various cameos. There’s Isaac Hayes as a saloon owner, Julie Newmar as “Miss Kitty” (a reference to both the Gunsmoke character and her role Catwoman in the 60’s), Carel Struycken (“Lurch” from the 90’s Addams Family movies) as a mortician (a staple of both horror and western films) and George Takei as Doc Valentine. Although he spouts his fair share of Star Trek references, his character isn’t just there for a few jokes. Being the town’s dentist/barber/inventor/robotics specialist/etc., Valentine is guilt-ridden over the “failure” of the force field badge he designed killing the marshal and soon turns to drinking to numb the pain. Takei’s acting skills get to shine as his character rapidly (but believably) goes from humorously drunk to mournful and then to violent and unpredictable before recovering the next day. This multifaceted role was a major step up from the roles traditionally offered to Asian American actors in westerns: cringe-worthy, one note “comedic” stereotypes like Hop Sing. Although not his greatest role, acting in movies like Oblivion did keep his name in the public eye, which allowed him to further develop his fanbase and fame. Over time, he became a famous enough figure to lend his name to causes like this protest and actually have it mean something to the general public. I’m not saving that Oblivion was solely responsible for this, just that it’s a good-sized stone on the road that is George Takei.

Full Moon has wisely released the film onto DVD in order to cash in on the hype for the upcoming (as of this writing) film Cowboys and Aliens. The DVD offers a nice, crisp transfer with some minor print damage here and there. The audio sounds great, especially the dead-on perfect western score. As was the case in Killjoy 3, there is no chapter selection menu, despite the presence of chapter stops! This is simply inexcusable. I can’t imagine why anyone at Full Moon thought this was a good idea. The fact that you can’t go back to the main menu after starting the film is also irritating and I hope this is merely an issue with my DVD player and doesn’t represent the disc’s behavior on all players.

But that isn’t the disc’s biggest failure. Bizarrely, the “Video Zone” making-of segment from the original VHS release is nowhere to be found! Fans who want to learn more about the film’s production without searching out the VHS release will have to make due with Peter David’s recollections on the matter or pick up a copy of The B-Movie Survival Guide for its brief tidbits from people involved in the Oblivion series (along with those from other cult movies). That said, this is a huge blunder by Full Moon. They would be wise to avoid doing so on future releases, in addition to including chapter selection menus.

Besides the semi-animated main menu, the disc’s special features consist of two different selections of trailers. The first batch consists of previews for Oblivion, Oblivion 2: Backlash, Puppet Master: Axis of Evil, Doll Man, and Skull Heads. As usual, the “new” trailers very in aspect ratio and occasionally in quality. The transfer on the one for Oblivion, is good, but not quite as good as film’s transfer on the DVD. The Puppet Master: Axis of Evil, trailer is a new version using scenes from first Puppet Master in addition to new material not seen in the usual versions of the film’s trailer.

There are also 10 “Full Moon Vintage Trailers” (Technically Full Moon and Empire Pictures trailers) that are all full frame and are of wildly varied quality. The selection consists of Arcade, Bad Channels, Crash and Burn, Laserblast, Meridian (aka Meridian: Kiss of the Beast), Netherworld, Robot Wars, Seed People, Shadowzone and Subspecies. Not having seen the film itself, I can’t say for sure if the trailer for Arcade is the one that featured the original and eventually replaced special effects. The trailers for Bad Channels and Netherworld are worn while the one for Seed People is especially worn. However, it’s of Criterion Collection quality when compared to the awful quality of the ones for Laserblast and Shadowzone! Still, it was a pretty fun trip down memory lane. I just wish they had a “play all” option.

Despite the DVD’s flaws, I still found Oblivion to be a very enjoyable way to kill about an hour and a half. While The Haunted Casino and Killjoy 3 will eventually get traded in at my local used DVD store, Oblivion will always sit proudly on my shelf. Here’s hoping that a DVD of Oblivion 2: Backlash is in the works (but without any of this disc’s faults).

UPDATE: It turns out that the sequel did get a DVD release…in 2004. Although initially confused by the seeming reverse order of the releases, further research revealed that Oblivion had its original DVD release in 2002 through Artisan. That said, seeing the prices given for it on Amazon have me hoping that Full Moon reissues the sequel.

Bad Behavior has blocked 546 access attempts in the last 7 days.