The Price of Fear 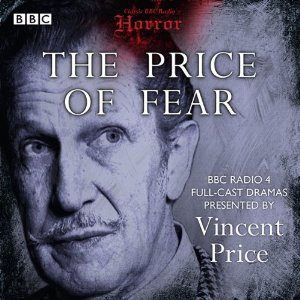 Today marks what would have been Vincent Price’s 100th birthday had he not unfortunately shed this mortal coil. In recognition of this momentous occasion, the horror community (and his hometown of St. Louis) is celebrating the “Vincentennial” in a variety of ways. I have chosen to celebrate by reviewing his classic British radio series, The Price of Fear.

Although best known for his work in film, Mr. Price had a long career in radio that spanned from around 1936 through 1984. The source of that information, Ronald L. Smith’s Horror Stars on Radio wisely notes that Price’s “…contrast of softly pleasant voice with evil deeds would be a ticket to fame for [him]” and this would be utilized to maximum effect in the audio-only world of radio. Oddly enough, his radio career both started and ended with British radio shows, making the subject of today’s review an especially appropriate celebration of this particular aspect of Vincent Price’s career.

The Price of Fear debuted on the BBC World Service in 1973 and ran until 1974, spawning a tie-in book along the way. In 1983, six additional episodes were produced, bringing the series’ total number of episodes up to twenty one. As the show’s host, Price would either recount a fictional adventure of his or simply narrate a story presented to him by another character (in both cases, the episodes were a mix of original scripts and adaptations of stories predating the series). This information, along with an episode guide, can be found here. It should be noted that some sources claim the series aired until 1975 and there are claims of a twenty-second episode called “Never Gamble With A Loser.”

AudioGo’s (formerly BBC Audiobooks) double CD set consists of four episodes from the show’s initial 1970’s run: “Cat’s Cradle,” “Come As You Are,” “Speciality of the House” and “The Ninth Removal.” Those who read the above-linked episode guide will quickly notice that these are not presented in the original broadcast order. According to the detailed liner notes (more on those later), the reason for this selection/order was done in order to match that of the original audio cassette release from the 1980’s. Why did the cassettes present those particular episodes in that particular order? My best guess is that, due to the series’ varying episode lengths, those episodes were chosen due to their ability to fit on each side of an audio cassette. That sort of thing is not as far-fetched as you might think, as it effected the releases of many albums in the days of 8-tracks.

The first CD begins with “Cat’s Cradle,” an adaptation of Bram Stoker’s “The Squaw”. In it, we find Vincent Price relaxing in a small Germany city during a break in the filming of a horror movie. He befriends a newlywed couple on their honeymoon, who invite him to accompany them on a tour of a local castle with an infamous reputation due to its involvement in the Inquisition. Too bad that a boring blowhard acquaintance of Price’s invites himself along. Things get even worse when he accidentally kills a kitten while trying to get its attention. Between its vengeful mother and a castle full of torture equipment, you know that things won’t end well.

The second story, Bill Ingram’s “Come As You Are,” appears to have been written especially for the series. The episode begins with Vincent Price discussing his dislike of costume parties, which leads to his recounting of one such party in particular that cemented his aversion to such events. It all started when a friend of his invited him to a costume slash housewarming party during a visit to London. Despite his attempts to get out of it, his friend won’t take “no” for an answer (which leads to a hilarious telephone conversation) and Price reluctantly attends. Feeling out of place, Price quietly grabs some alcohol and finds a place to hide…where he is surprised to find another man hiding in the darkness. His mysterious new friend refuses to give his name and instead tells of his attempt to kill his unfaithful wife. Although you might think you know how this story will end, odds are that you’ll only be half right.

Disc 2 kicks off with “Speciality of the House” (based on the story of the same name by Stanley Ellin) which features a subject very near and dear to Vincent Price’s heart: cooking. A trip to New York leads to Price reconnecting with another old friend, who is eager to show him his favorite restaurant. Although initially put off by the oddball rules and seemingly bland soup of the dismal, small obscure establishment, Price soon shares his friend’s enthusiasm for the place. But why does the chef never let anyone see his kitchen…

Our final tale, an adaptation of R. Chetwynd-Hayes’ “The Ninth Removal,” is an example of the kind of episode where Vincent Price introduces a story rather than actively participate in it. We open with a woman complaining of how modern girls dress. Our usual narrator appears not long after, explaining how he met this woman while visiting a friend’s psychiatric clinic in order to do some script research. Through a combination of radio drama and Price’s narration filling in some gaps, we learn of both her strict upbringing and hatred of a new female employee that is “corrupting” her workplace. And how do a string of “sex murders” tie into all of this? You’ll have to listen to find out, as even those who correctly predicted the ending to “Come As You Are” will be blindsided by this.

Mr. Price and his co-stars all give top notch performances that easily draw the listener into the stories. Although sound effects are used, Price’s voice is the sinister star of this show. His descriptions of the bloodshed in “Cat’s Cradle” are far gorier than any sound effect could hope to achieve, which means this show isn’t something that be be listened to with small children around. Although all four episodes are appropriately chilling, there is humor present as well (as is the case with much of Price’s classic horror films). How can you not love amusingly macabre lines like “he attached himself to us like an incubus,” especially when delivered in the star’s trademark “serio-comic” tone? Despite the packaging noting that the sound quality reflects the age of the source material, I didn’t notice any problems (unless you count two instances of actors flubbing their line). In fact, the quality easily blows away all of the allegedly “public domain” .MP3s made from aging audio tapes of the series. My only real problem with this release was the way the two discs were held in the case. Had I known that the flipside of the tray holding the CDs could be opened by lifting from the left (rather than on the right like most of the CDs I own), I would have had a much easier time getting to disc two.

In addition to offering over two hours of listening pleasure, The Price of Fear comes with liner notes that provide a wealth of information about the history of the series (complete with reproductions of promotional ads and a vintage interview). This is a definite must-have for all fans of Vincent Price and I sincerely hope that sales are good enough to warrant releases of the rest of the series.