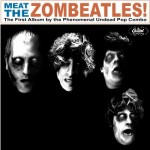 It’s amazing how well it works, since it easily could have gone horribly wrong.

The premise is simple enough: take the most legendary rock band of all time and turn them into zombies. However, going half-ass at the project by sprinkling the word “brains” across the lyric sheet taken from a “Greatest Hits” comp would have resulted in a disposable novelty record to be quickly forgotten or, if lucky,  to be dusted off for October episodes of the Dr. Demento show when the good Doctor had nothing better to play.

Instead, MEAT THE ZOMBEATLES is astounding and very enjoyable. It’s only eight songs long, though that brevity might help the parody. The Zombeatles don’t wear out their welcome, nor does the concept run thin. (The clip of “A Hard Day’s Night of the Living Dead,” a clip that gained national exposure when Rob Zombie picked it for his Halloween Picks back when YouTube’s Front Page held some clout, is from a documentary about the Zombeatles, which hints at more music or a possible follow-up recording.)

Three of the eight songs can be considered noteworthy hits – “Halp,” “I Wanna Eat Your Hand” and “Hey Food” emulate established staples of radio (if, at the time of this writing, radio exists) play. I think that these songs were picked, not just because their Zombeatle counterparts are fun to listen to, but if the Zombeatles didn’t include them, people would say “What about….?” as some half-hearted, I-Can-Do-This-Too attempt at ‘constructive criticism.’ These are the obvious targets for parody and their inclusion is more, in my opinion, an appeasing gesture.

They’re good songs but when compared to the other tracks selected, the three Hits, they lack that extra panache. Plus, it’s the deeper cuts that show that the musicians behind the Zombeatles put some sincere thought into what they were doing. Instead of regurgitating their copies of “1,” that collection of #1 hits, the Zombeatles have dug deep to find songs. These are true Beatles fans and that shows in the music, as well.

“Brain” Itself is a particularly genius song, not in just its adaptation for the undead crowd but its selection. At first, I didn’t know which song it was parodying; having no idea that “Rain” was a B-side to “Paperback Writer”, further research indicated that the ‘promotional videos’ for the song were an early version of a music video.  It’s not as obscure as I first originally though, but it’s not “She Loves You (Yeah, Yeah, Yeah)”

The album doesn’t sound like a Beatles cover band doing zombie versions of the songs. It sounds like legitimate zombies are playing the instruments. The breakdown of “Dead Prudence” and “Hey Food” is what a less-than-animated-reanimated player would sound like.

It’s no big secret that the Zombeatles have some living alter-egos in the band The Gomers, a band you should check out in their own right. But big respect for Gorge, Jaw, Pall and Dingo; for how exceptional MEAT THE ZOMBEATLES is as a recording, it’s a testament to the quality and thought put into the project. Lesser meat would have failed and the Zombeatles get to reap the tasty, fleshy rewards of victory.

Bad Behavior has blocked 1785 access attempts in the last 7 days.