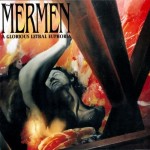 The Mermen
A Glorious Lethal Euphoria

June is a four letter word. June, historically, has been what they call a shit month for me. Nothing outright tragic or catastrophic has come about within that calendar month which is why the yearly dolor that rides in after May is confounding. Outside of some biological or metaphysical association with the start of summer somehow triggers a lethargy party in my frontal lobes, I can’t figure out why this month just brings me down.

This isn’t an indulgent plea, but more of an explanation that for the last fistful of years, I’ve found that during this period, instro-surf-mental music tends to make the days a bit more tolerable. About three summers ago, I was digging through the used bin at a local record shop, trying to see if my good fortune would kick in. Luck had it that I found a later-stage Man…Or Astro-Man? release (A Spectrum of An Infinite Scale) as well as both something from The Fireballs and The Pyramids among the billion copies of Crazytown’s first record and other alt-rock castoffs. Sometimes you dig without knowing what you’re going to find. That day, I came up with A Glorious Lethal Euphoria by a band called The Mermen.

No clue about who or what this group was. The Mer– prefix hinted at water, which hinted at surf. The opening song title was “Pulpin’ Line” with additional tracks “The Drowning Man Knows His God,” “Lizards” and “Blue Xoam.” I honestly had no expectations. If it turned out to be a dud, it couldn’t be resold. It was an exciting risk, something that is harder to duplicate with modern technology and how everything these days comes with a thirty second preview. This store didn’t have listening stations set up for those who wanted to sample before purchases so appropriately, I dove in.

I think it was the title “With No Definite Future & No Purpose Other Than To Prevail Somehow…” that gave me the go ahead, letting me know that this album was going to work out. And it did.

It’s not traditional surf, but has the influences of surf. The title “The Drowning Man Knows His God,” a bit prog-rockish (hell, most of the titles are prog) gives warning that this isn’t some Ventures cover band. A lot of reviews for this record, which came out in 1995, link the words “psychedelic,” “Hendrix” and “reverb,” which I think one of the three are fitting.

The album is powered by Jim Thomas’s guitar and like the Experience, Allen Whitman’s bass and Martyn Jones’ drums offer a solid support for Thomas’s more fuzz-covered explorations of sound. But there’s something heavy here.  A Glorious… has some weight in the songs. The sticker on the front of the album describes them a “Dick Dale meets Sonic Youth,” which is terribly accurate. This is the music of minds soaked in reverb and held down/up by consciousness, very influenced by the year it was released. “They’ll Bloom” supports this grunge-against-surf comparison, as Jim says it was written “in anger at Kurt [Cobain’s] supposed suicide.”

The cover image, taken from the ceiling of a Mexican restaurant in Tokyo, Japan, features a painted rendition of Jesus dying on the Cross. The title is taken from the philosopher Martin Buber, whose “I-Thou” philosophy consists of “relationship that stresses the mutual, holistic existence of two beings. It is a concrete encounter, because these beings meet one another in their authentic existence, without any qualification or objectification of one another.”

“I guess you can say the theme between the title and the cover is about bearing the difficulties and compromises of life, carrying your cross, not diluting them.” – Jim Thomas

As June shows up, I’m more readied to handle what trials and tribulations may come within the next thirty days. With this album, I am more ready to deal with the difficulties of these five weeks. A good message with great music.

Bad Behavior has blocked 742 access attempts in the last 7 days.