A Handful of Dirt: Our Ghoul Jenn

The Pine Box Boys, TALES FROM THE EMANCIPATED HEAD 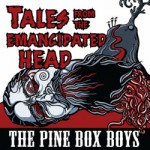 The Pine Box Boys
Tales From The Emancipated Head

The greatest artistic injustice that will come about at the end of 2011 will be the plethora of BEST OF lists that don’t place Tales From The Emancipated Head by The Pine Box Boys up near in the single digits. Most might just straight up ignore this release and that’s plain offensive to me.

The music by the Pine Box Boys (Lester T. Raww, “Possum” Carvidi, Col. Timotthy Leather and Steven “Your Uncle” Dodds) is what they’ve christened ‘bloodgrass,’ the sincere bluegrass and southern music which holds the influence of the macabre and evil of life. But I can’t see a label fully covering the band’s sound. There are elements of classical, rock and punk in their music.

I am reluctant to use the h word when describing the Pine Box Boys, because applying the label “horror” would instantly inject a distancing buffer that risks putting this group out on the margins. The Pine Box Boys are a straight up, damn fine group of musicians.

Though it’s a concept album, which is rarely a great starting point to get into any group, Tales From The Emancipated Head would be what I’d give anyone who wanted to get excited about music again. Lester’s narration before each song is the hand that guides the metal edge scraping away the cynicism, priming you for the music that is to follow.

It doesn’t take much digging to get into the depth of metaphor of songs like “Frankenstein” and “The Weeper.” And when you listen to “Pretty Little Girl,” it’ll take a few times to take in how this bluegrass sounding sound incorporates both an Eastern European folk melody as well as throat singing. Yes, Lester T. Raww throats sings and it’s glorious. This is a contender for scariest sounding song of the year and it’s bewildering how it all came together so well. Possum, Col. Leather and Your Uncle’s playing is incredible and both Jason Kleinburg and Yoon-Ki Chan on fiddle are magnificent additions.

The story of Tales From The Emancipated Head is right in the title. A poet’s head suddenly finds a bit of freedom and we are graciously privy to the thoughts of this mind, the evil and fantastic things he has seen. It all wraps together in one of my favorite songs from the album, simply titled “Blood.” The album ends with “The Funeral,” which I think was a way to make sure the Pine Box Boys send you home alive and moving, but I think the album truly ends with the penultimate track, “AM Radio Floating In Blood.”

This is a great album and I can’t recommend it enough to you. If you are lucky to have them come by, do what you have to in order to catch them.

When late in his life, Vincent Price described his movies as “fantasies” and I think that’s the best way to apply to the elements of supernatural in the Pine Box Boys.

Sometime before I could count my age on two hands, I was transplanted from the South West to the North East, criss-crossing the country. I never grew up metropolitan but never would be so bold and bullshit to call myself a “southern” product. As I come up to the time when it’ll now take three Xs to sum up my years, I’ve built up some acceptance for what I am and understanding what I’m not, mind you. And being that I’m full of thought, I’ve spent some on the Pine Box Boys.

I think what makes the American South acculturate these dark fantasies is the same as why New England allowed H.P. Lovecraft and Poe to prosper. There’s something Victorian and Romantic about the locales that exist outside the bright lights of industrialized life. I think there’s a way that getting beyond a concentrated amount of life could promote a greater external imagination, which will allow the darker flourishing images of fright and might to grow.

There’s something about the American South that lends itself to fanciful situations. Unfortunately, there are more ways this has been abused than properly used. Putting a southern accent on a racist voice or diluting a movie’s antagonists with characteristics meant to invoke the ideas of “inbred” and “hillbilly” are errors that creative hacks and insincere charlatans use to scam you out of your money.

Much like much of the music that I’ve been fortunate to find in these recent years, there’s an undeniable sincerity in the music you hear off a Pine Box Boys record. The Pine Box Boys’ earnest in their music is one of the shining examples I’ve found (and continue to look forward) of ‘southern horror.’ They might be enough to counteract any ridiculous stereotype that has turned a culture into a simple caricature.

It’s highly unlikely that I could ever see blood rain skyward if I were walking in Chicago. But after listening to “Confusion Hill?”, I think it’s a possibility if I were to head to a rural corner of this nation, finding myself alone under a shady tree, my imagination would get the best of me. Until, of course, I saw that thin line of red flowing uphill.

Bad Behavior has blocked 1255 access attempts in the last 7 days.