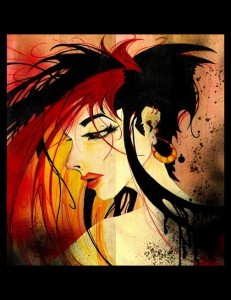 A lot of weddings had been happening ’round the last month. The climate has turned a bit more agreeable, giving favorable traveling conditions for those out of town relatives to come and join in the joyous festivities.

Traveling is what Cort has been up to, having returned from a trip out West recently. It’s good to see Cort out and about, especially since he’s what we, in our profession, call “haunted.” Once destined to be married himself, Cort’s engagement fell through for reasons not entirely clear. The bride was known for a lattice of rich mahogany hair that blushed a fine rosewood come the middle of July. Rumor says that she might have done Cort wrong and when he sought to meant things right, well. That’s when she left.

Though gone is rarely for good, and it’s possible poor Cort’s been haunted by her ever since. Can’t say he’s gotten any closer to the altar, which is a shame. He’s a good guy. We’ve heard that he went west, where beautiful women are in no short supply, but found her face on each and every one. 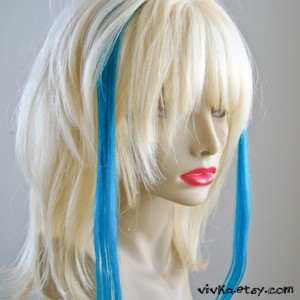 H U M A N . H A I R a PAIR of bright dark AQUA teal blue extension clip ins

She excels in selling organic and synthetic hair extensions and clips, much like the aqua-teal additions above. Understandably, blue hair doesn’t always function in a business minded world. Your task of selling life insurance might be hindered if your hair exists in a non-natural hue. But sometimes, you have to have purple hair. Life is full of situations where it’s perfectly appropriate to have a streak (or five) of orange in your hair. Check out the other fine products. 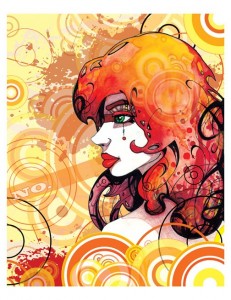 It’s hard to say what exactly Cort saw in his would-be bride. We never really got to know her and what details he is free to share don’t really compose a complete picture. Perhaps he’s a bit worried that upon sharing what visions he saw when the sun crested against her hair, they might disappear. Perhaps he saw similar shapes and patterns like that in this digital art print, the product of Vivka’s artistic hand. We have our theories. 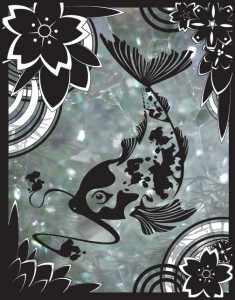 Some people are fashioned to be better off living alone. What hand framed their symmetry made sure of that, and we here judge not. Subsequently, there are those who have been constructed to function with a mate, much like this picture here. The LiveFish has a mate of its own in Vivka’s art gallery, and you are welcomed to get one, the other or both. Be you alive or be you dead, these pictures will look fine hanging above your bed. 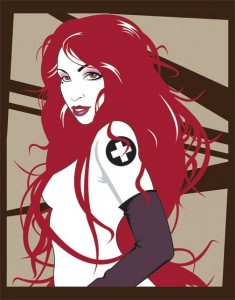 If you’ve put a couple decades under your belt, and heavens know we’ve got plenty here at the local, you might have caught eye of a Patrick Nagel painting, especially thirty years ago. Not just the cover of a Duran Duran album, the artist made a distinctive style that it can be seamlessly parodied, or in this portrait of the artist herself, made into a tribute. If you have a fondness for Nagel’s art AND find yourself enchanted by the photos of one Vivid Vivka, you’ve now been given the greatest gift of all. 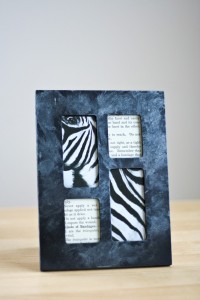 Hair and paintings aren’t the limit of Vivka’s offerings, as many ‘upcycled’ frames are available for your purchase. Find a nice companion frame for one of the prints your purchase from her or simple hold some scraps of paper or unused wedding invitations that you hold dear. Whatever you slide into the frame will look fantastic, so do be a dear and purchase at least five.

Some of her photographs are risqué and not terribly safe for work environments that don’t promote a healthy intake of cheesecake. So do be warned when you visit her Facebook pages (for both her and her Etsy store.) If you wish, you can also find Vivka on Twitter. Tweet something at her and then don’t be a twit: come back next week for another Tuesday uEtsy.