[Having written over a thousand bad monster jokes, Monstermatt Patterson has a mind unlike any other. Today, he recollects on a fond memory of his and a movie he’s seen. Find more about the mind of Monstermatt here at his site, and then head to pick up his first book,  Monstermatt’s Bad Monster Jokes Vol.1] 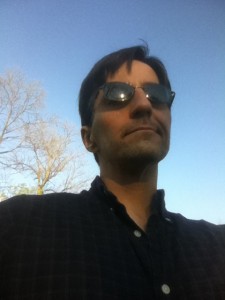 I’ve been asked by the “ghoul” people of Gravediggers Local to share some monster memories, with you! I hope you’ll enjoy it! Let’s begin.

My first taste of “Frankenstein Conquers The World”, a 1965 Japanese installment of the monster’s film history, was at my grandmother’s birthday party, July 1978 or 1979. I would’ve been 8 or 9. Didn’t you know? Grandmothers and monster movies go hand- in- hand, or at least they should. Write to your congressman to get that made into a law.

Anyway, the movie was on in the background for us little ones during a rain storm that forced us indoors. I have to say that I was sort of disappointed at first. This is because I expected the usual Karloff or Strange version of Frankenstein’s monster, to rampage the globe. This was something completely different.

The basic story of the film is that a group of soldiers take a human heart from a laboratory in Europe during World War II. It is believed to be that of Dr. Frankenstein’s monster. They send it to Japan, where it gets exposed to radiation from the Hiroshima bombing.

The heart has continued to grow, mutating, and eventually sprouting appendages like arms and legs. At one point, it becomes a complete body, and it escapes.

Several years later, a feral boy (sporting a familiar looking flat head, along with some bad dental work) is found and captured, by the scientists.

Could this have some connection? Was he selling magazine subscriptions? Well, he did get dubbed, Frankenstein, so there might be something…

He’s getting huge! He gets chained up, forcing him to gnaw off one of his hands! He escapes! Was he trying to get tickets to “Spiderman” on Broadway? He shouldn’t have hurried.

Anyway, the “hand” crawls away and survives for a while, before dying of malnutrition. What, it couldn’t get some “finger food”?!

Frankenstein gets blamed for all kinds of havoc along the countryside. He’s over 20 feet tall, by now! The problem is-there’s another creature doing the damage: Baragon!! See? Frankenstein is a misunderstood giant, just like Brigitte Nielson!

During a search, they accidentally find Baragon, and that sets off a terrific battle with Frankenstein, that ends with both of the giants getting sucked into the trembling, unstable earth.

Ok,that’s your basic breakdown of the film. Here,I have to add a few things…

When Frankenstein is in a cage, and in shadow, that was one of the turning points for me. He is grunting, sweaty, (which a lot of films showed in the 50’s-70’s.It gave you a feeling of reality. People perspire. Even 20 foot tall mutants). It’s a strangely, creepy scene.

I was familiar with Godzilla films, so I had no problem having Frankie fight Baragon. That was just icing on the cake! Huge battles, Giant monsters! Winning!

I fell in love with this film a little more, each time I saw it. Speaking of “it”…

If Abbott & Costello were talking about this film today, it would have to go like this-

Abbott: You know, Frankenstein’s heart just wasn’t in “It”.

Costello: No. but, it was in “Frankenstein Conquers The World”!

Abbott: “It” was in “Frankenstein Conquers The World”?

Costello: No, the heart was in it.

What film has a giant boy, with Frankenstein’s heart-leading a conga line worldwide?
Frankenstein “Conga’s” The World!

That’s a look at one of favorite horror films of all time. My love for it started on my grandmother’s birthday, all of those years ago. I hope you’ll find that it’s one of your favorites, too.

[Monstermatt Patterson, “The Man of a Thousand Bad Monster Jokes”, is the author of “Monstermatt’s Bad Monster Jokes Vol.1“. He’s  a writer for HorrorNews.Net, writer of “Wolff’s Run” (a horror trilogy coming from ZombieInkComics), a Maskmaker and voice talent.]