Dead on the Beat 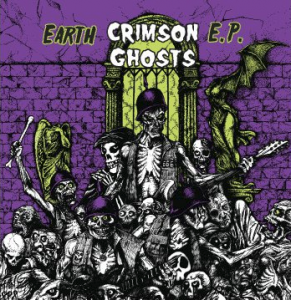 One cannot discuss the Crimson Ghosts without first discussing the Misfits. Formed by Glenn Danzig in 1977, the punk band has gone through many changes since its humble beginnings in Lodi, New Jersey. Although their name came from a Marilyn Monroe film, the band’s image quickly became linked to horror due to both an increased focus on horror-themed material and their adopting the villain The Crimson Ghost from the classic serial of the same name as their mascot. Despite numerous lineup changes and the band breaking up in the 80’s, the steady stream of “posthumous” releases and big name fans in the music world, kept their name out there and boosted their popularity to new heights. In fact, the band reformed (sans Danzig) in the late 90’s and are still touring to this day. Naturally, the band has prompted numerous song covers and tribute acts.

The Crimson Ghosts formed in 1999 with the idea “what would of happened if horror punk legends The Misfits were formed in 1962?” The result is a combination of Misfits classics and Ventures-style surf rock. Although this release’s name and cover art are a play on the Misfits’ Earth A.D./Wolfs Blood album, it consists of instrumental interpretations of tracks from Static Age, Horror Business, Walk Among Us, Evilive and Die Die My Darling. I must confess that I have only heard a few Misfits songs, so I will mainly be judging the following as surf songs rather than how well they work as reinterpretations.

Things kick off with “London Dungeon,” which takes its name from the (in)famous British spooky museum/haunted attraction. As this track will show you, the band’s Ventures comparisons are well earned. It’s peppy, but still has a spooky undercurrent. While “Return of the Fly” has a creepy opening, the rest of the song is rocking. Well, rocking but somewhat mournful. Despite my admitted lack of experience with the Misfits’ music, I could tell this was definitely a Misfits tune. It’s hard for me to describe, it just has the right feel. In the energetic “Horror Hotel,” named after a British horror film, punk and surf make beautiful babies. “Teenagers From Mars” has a somewhat heavier intro than preceding track, but the rest is fast ‘n light. The Crimson Ghosts’ surf take on the song shows just how well they are able to make Misfits tunes their own. Guitars and drums really shine in the unfortunately-named “Children in Heat,” which has a classic-sounding surf outro. The hard and fast reverb rock of “20 Eyes” reminds me why I love surf music. “Night of the Living Dead” starts out with a heavy-sounding intro and quickly moves into pounding beats with light reverb touches. “Vampira” is damn fine tribute to the mother of all horror hosts, with a great buildup towards the end. In “Die Die My Darling,” named for the classic Hammer film, classic surf touches abound (although its punk origins shine through). It seems that the notes themselves seem to symbolize the titular phrase. It ends with a great fadeout to a great song (and album).

Do you like the Misfits? Do you like surf? Then you’ll love the Crimson Ghosts! Given the release’s low price and excellent selection of music, Earth EP is the perfect way for curious potential fans to see whether or not they want to purchase any of the Crimson Ghosts’ other albums. In my case, it also convinced me to finally get into the Misfits more. Come to think of it, this ties in perfectly with the use of EPs in the world of punk music…

Special thanks to The Crimson Ghosts for use of the image!