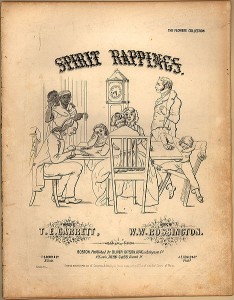 From the mid-1800’s up until 1920, Spiritualism was a huge movement in the United States. Although it was similar to other monotheistic religions in that it said there was only one God, Spiritualism differed in its belief that all necessary knowledge came not from any scared texts, but from communication with spirits! Its support for women’s rights and ending slavery also helped attract numerous followers. The movement started on March 31, 1848 in New York. On that date, Kate Fox asked that whatever was making the strange rapping noises in her family’s home to respond to her snapping her fingers. It did. Soon Kate and her sister Margaret had worked out a code to communicate with the spirit they claimed was haunting the house. When the sisters were sent to their brother’s house by their parents (for claiming that a spirit told them a man in the area had killed someone in their home), the rappings came with them. But it wasn’t until they went to stay with some friends of the family in Rochester that things really took off. Said friends were very taken with the rappings and spread the word to their friends. The friends told their friends, who told their friends and so on until the Fox sisters (and spirit rappings) became famous. Others claiming the ability to communicate with spirits soon appeared on the scene and further increased interest in ghosts, mediums, séances and such. Interestingly enough, the friends who had taken in the girls were Quakers, which explains how certain social issues became ingrained in Spiritualism. As the years went on, things got worse for the sisters. By 1888, both Kate and Margaret had publicly denounced Spiritualism and Margaret confessed that it was all a hoax to the newspaper “New York World.” Not only that, but she demonstrated her hoaxing techniques at the New York Academy of Music! It turns out the original rappings where created by bouncing an apple on a string on the floor of their bedroom. The rappings done in response to the request to answer were a combination of moving their knuckles, joints and tendons in their legs in certain ways. When the admission of fraud made their lives worse, Margaret made a failed attempt to recant her confession (presumably hoping that people had forgotten she had demonstrated her hoax techniques in public). The fact that skeptical authors revealed other methods of producing “spirit rappings” didn’t help matters either.

In 1853, a song called “Spirit Rappings” was written by J. Ellwood Garrett (lyrics) and W.W. Rossington and the sheet music is available online. Under US Copyright law, any American work published before January 1, 1923 is in the public domain (with the possible exception of sound recordings). Remember, this only applies to copyrights, not trademarks. In other words, any US citizen (aka most of our readers) can record themselves playing this song and can do whatever they want with said recording. Just keep in mind that a new recording of the song would be copyrightable, so the same freedom doesn’t apply to other peoples’ versions of it. If you decide to record your own take on “Spirit Rappings,” please feel free to send your Youtube videos and/or .mp3s of your performance to us. Who knows, maybe it could get featured on our podcast!

That’s not the only piece of spooky music that’s in the American public domain. In 1919, Joseph John Davilla wrote a little ditty called “The Mysterious Axman’s Jazz (Don’t Scare Me Poppa).” The tune was named for the “Axeman of New Orleans,” a serial killer that terrorized the Big Easy from 1918-1919. The Axeman (or pranksters claiming to be the Axeman) was fond of writing to local newspapers about his crimes and in one such letter, he claimed that he would kill again on the night of March 19 and would only spare those who were in the presence of a jazz band. On that night, jazz halls were packed and anyone with a shred of musical talent was playing jazz at private parties. Nobody was killed that night and the Axeman vanished after his final murder on October 27, 1919. Although only the cover art for the above mentioned sheet is available online, the sheet music for this instrumental ditty is not currently available online. As the Historic New Orleans Collection has a copy of it, I hope that they will one day scan it and share it with the world through their website.

The sheet music for “The Mysterious Axman’s Jazz (Don’t Scare Me Poppa)” has since surfaced online, which has resulted in a recording of it being made available.

Bad Behavior has blocked 546 access attempts in the last 7 days.