Stuff your Face on Halloween

We’ve all heard the jokes about the perceived uselessness of Halloween cards, but the truth is they have their uses. Judging from the Google Books preview for Diane C. Arkins’ Halloween Merrymaking, they seem to have developed from the market for Halloween party invitations. Nowadays, they also seem to act as the October version of blank “Just Because” cards. I actually got a Halloween card on Halloween once. You see, a buddy and I used to visit haunted attractions every October (my first three haunt reviews are the result of that tradition) until he had to move to a larger house when he started a family. The year he moved, well, I think you can guess what he sent me that October.

Seeing as how the US Postal Service could use a boost in income, I thought I’d share a bunch of free cards with you. Why are they free? Well, they were made before 1923 and as I noted in Spirit Rapppings, any American work published before January 1, 1923 is in the US public domain (with the possible exception of sound recordings). They can be either be used as standard greeting cards or be simply printed out and glued onto cardboard to use as postcards. So whether you want to use them as invites for your spooky shindigs or surprise a friend this month, feel free to print ’em out: 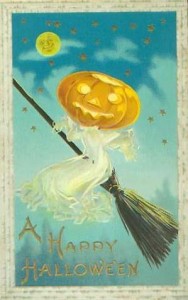 You can find a larger version of the above card over at Wikipedia (albeit with a border you’ll need to crop out). 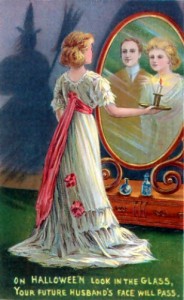 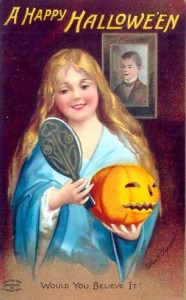 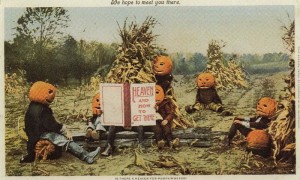 In case you’re wondering about all the focus on mirrors in those cards, it’s a reference to a now defunct Halloween tradition. It was once believed that if a woman stood in front of a mirror at midnight and brushed her hair three times, the face of her future husband would appear over her shoulder if she was going to get married that year. This was only one of many ridiculous ways one was supposedly able to tell their marital future on Halloween.

If those cards aren’t enough for you, then RavensBlight.com has you covered. Granted, they’re not in the public domain, but you can still send ’em to friends. Ravensblight has both a pop-up card and a selection of standard greeting cards, both with envelopes. It’s also possible to alter the Necronomicon book covers and notebooks into greeting cards.