It Came From Wikipedia IV

It’s perverse how a divorce can become a footnote on a Wikipedia entry; even worse when it becomes evident that it was the catalyst for a punk band’s break-up. 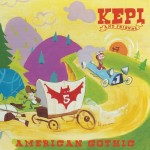 In 2008, one year after the Groovie Ghoulies disbanded, Kepi Ghoulie released two albums that established himself as a solo artist. Having dabbled with a single release with the 2001 Yes Depression EP, Kepi’s transition into a solo artist wasn’t totally unfounded. When American Gothic and Hangin’ Out were put out by Asian Man records, it seemed like the logical next step for him.

Of the two, American Gothic has the more acoustic music, as if Kepi were to take his guitar and pull a guerilla act, you might find him doing “This Friend Of Mine” and “Full Serve” at some sunny corner of your town.

However, American Gothic is the heavier of the two in terms of songwriting. It’s easy to read into songs like “Tornado Love,” “Running on Empty” as connected to the break-up from long-time beau and Groovie Ghoulies bandmate, Roach.

While on Hangin’ Out, the sound is the pop-punk that Kepi is known for. “Supermodel” and “Twelve Hour Town” are two-fists of power-pop-punk punching down all partitions. It is pretty rad. “Love On Demand” is probably what the Ramones would have written if they were still around today, and there’s a really great cover of the Cramps “The Natives Are Restless.” 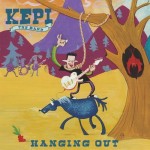 The album is not completely void of the emotional weight of American Gothic. The opening track, “Hey Kepi Let’s Go,” can be interpreted as his friends getting Kepi out of his house and the next song, “My Life Is Starting Over Again,” sums it up in the title. The lyrics of “Red Bat” deals with the situation of leaving a pet with someone else, understanding that though the separation sucks, it’s for the best.

With similar concept art and both albums featuring versions of “Stormy Weather” and “Sleepy Hollow,” American Gothic and Hangin’ Out are essentially the two sides of the same coin. It was spent wisely, He continues to play with band and he released Life Sentence in 2009.

For your Halloween season, you might want to pick up Hangin’ Out for more conventional celebrations. But, when the party is over and the November where you live is colder than usual, definitely put on American Gothic.

Bad Behavior has blocked 2398 access attempts in the last 7 days.