Music to Haunt By: Alex Otterlei

There’s a Trail of Terror in my Lungs

Music to Haunt By: Darkmood 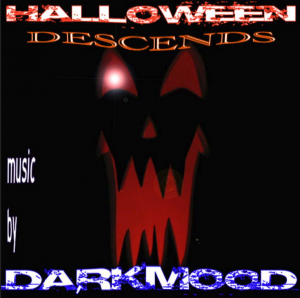 As I noted earlier, most albums covered in “Music to Haunt By” have a timeless feel to them. However, a select few have a more modern feel for them. So if you belong to the school of thought that a haunted attraction or Halloween display should make visitors feel like they’re in a horror movie, you might be interested in Darkmood’s debut album Halloween Descends, especially if you’re a fan of John Carpenter’s music.

The album gets its name from its first track, “Halloween Descends,” which features a pounding intro and plenty of screams. While very Carpenteresque, don’t expect it to sound like Carpenter’s famous theme for Halloween. “They” has a very orchestratic opening which gives way to an industrial feel and has very eerie touches towards the end. It’s perfect for a haunted factory, industrial maze, etc. The chanting-like opening of “Twilight” leads to some whispered vocals about blood drinking and screams, while lots of light (but creepy) touches aplenty. “October March” has light opening that’s almost like music box and later takes symphonic tone, which is soon followed by an industrial feel. The sound of feedback is put to good use here as well. The simulated musical creaking of an opening door starts off “Night Falls” and is followed by the sounds of wind, pounding, and heavy music (with touches of feedback). There’s a definite sense of darkness and evil approaching. “Stalker” effectively combines a heartbeat-like tone, footsteps and spooky touches. The scream at the end is a great touch. Clocking in at just under a minute, it’s not suitable for looping (unlike the majority of the tracks on this album). However, activating it (perhaps via motion sensor) when someone enters a dark hallway would be an excellent use of it. Thanks to the ticking and chiming effects associated with clocks in “A Cold Chill,” it’s perfect for use with a 13 hour clock or clock-themed room. “It Creeps” has a dark and foreboding (yet energetic) feel, along with a catchy beat as well. As it provides a sense of being followed, this could work in a dark hallway or possibly even in a haunted forest scene. “Whispers Of Evil” eschews from using music in favor of utilizing numerous whispers in an odd language (with the occasional bit of coherency). While it could definitely work in a dark maze or hallway, there are numerous other uses for this. Hearing this coming from a dark corner in a room would be unnerving, as would hearing it playing behind a closed door (especially if the track stopped once the door was opened). I once heard of a voodoo museum in New Orleans that pumped in the sound of a beating heart through the air system. Although the recording was playing loudly in the basement, it’s getting carried through the vents dampened it to the point patrons would hear the soft sound of a heartbeat if they stood near a vent. Doing something similar with this track would be incredibly scary. “Eerie” definitely lives up to its name. It’s the best John Carpenter song he never wrote. Words can’t do this one justice.

“Zombies Rise” uses medium pounding beats, echoing background music and eerie wordless vocals to set the mood. If you want to make people feel like they’re trapped in an 80’s zombie movie, you need this track. Imagine an organ that plays ghostly, moan-like music. That’s a major part of “Dance Of The Dead.” It sounds unusual at first, but it grows on you. As you may have guessed, this would work well in a haunted organist scene. “Black Skies” has an eerie, slow build for its opening. A sound like a creaking door (but distinctly isn’t) is a constant factor here. “Thunderstorm” combines wind and synth work plus touches of thunder. It does a great job of capturing both the power of a storm and the sense of unease it brings out in many. The storm effects take over completely at one point. When you think about it, a thunderstorm goes well with just about any spooky scene. “Hellbilly” has no music and instead lets the soft sound of an evil hillbilly take center stage. He tells gagged victim to sit down and describes what tortures he’s gonna inflict on victim’s girlfriend. The sounds of power tool and screaming follow. This could work in a redneck-themed haunt by playing it behind a door that can’t be opened or if you do an old school “touch ‘n feel” haunt with a redneck theme. A person dressed as a sinister hillbilly could blindfold people and lead them into a dimly-lit room with this playing and explain that the sounds they hearing are a family member “entertaining” some other guests as they have visitors poke and prod at the remains of their victims. Steady synth work pounds in “Ghost Ship,” while we also hear the creaking of a haunted vessel. Are those moans in the background or just music? You decide. Given the outrageous prices that people on Amazon are charging for the soundtrack for The Fog, you should opt for using this if you want to do a scene based on that film. In “Outro,” a symphonic violin and spooky background sounds mournfully play us out. But that is not the end of the album. “Harvest Moon” is the first of three bonus tracks and features tribal-style drumming and the sort of background effects Darkmood is known for. The addition of a plinking piano makes for a seemingly unlikely mix, but it works! “A Sense Of Fear” sounds as if it’s played by someone who is nervous and constantly checks over shoulders. The darker synth work seems to represent what the player is afraid of. A heartbeat effect put to good use towards the ending. It’s perfect for a dark hall or any other scene where you want to create nervousness. The soft, eerie opening of “Dark Night” is soon dominated to creepy and foreboding synth work. The drums and cymbals are an interesting touch as well.

Darkmood is the brainchild of Steve Montgomery, who is also behind SDM and Notic Reign Records. SDM recently released their third album, The Flame, which has two tracks that might interest fans of spooky music: “Zombie-otic” and “The Crow.” SDM’s second album, This Present Storm, also featured a track called “Halloween” while Notic Reign released an album called Dominion Of Illumination which features several songs with titles that suggest dark things. As of this writing, Mr. Montgomery is currently ironing out some issues that have made most Notic Reign titles temporarily unavailable on Amazon and iTunes, but you can thankfully still buy Darkmood .mp3s at Bandcamp.com. If you want to do things a little differently at your home haunt or Halloween display, definitely pick up Halloween Descends, you won’t regret it!

UPDATE: The once out of print CD edition of this available is now available on Amazon! Due to CreateSpace’s limits on CD-R track numbers, “Whispers of Evil” and “Hellbilly” had to be removed. Thankfully those tracks can still be obtained online.