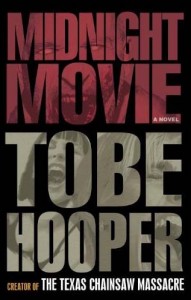 In Midnight Movie, Tobe Hooper and Alan Goldsher have successfully written a grindhouse novel. There is sex, there is violence, and there is unrepentant excessiveness that sometimes goes without explanation, daring you with its middle finger to try to find some rhyme to its reason. It’s a wild read and a definite addition to your library if you enjoy slashers, grinders or the cocksure attitudes of independent art.

Placed in an alternate-set reality, a fictional Tobe Hooper is contacted by a character going by the name Dude McGee about a possible screening of Hooper’s first, unreleased movie: a no-budget feature called Destiny Express. Securing a spot in an Austin dive bar during South By Southwest, Hooper watches his movie (essentially for the first time, since his memory isn’t what it used to be due to a car accident during childhood that both cracked open his skull and killed his best friend) along with a group made up of fans and clueless bystanders. Shortly after, the world turns to hell, death and fire, with all signs pointing back to Destiny Express as being the cause of what might be the end of the world.

The concept is really clever, something akin to The Ring/Ringu, where after witnessing a piece of media, death will befall the viewer. However, instead of being passed from one to another, it takes only one showing of Destiny Express to kill a lot of people. Ergo: Never doubt the power of Tobe Hooper.

Arson, drugs, bombings and zombies infest this world turn to madness by the power of independent cinema. Told from the first person of those who experience and survived the trials, affectionately referred to as ‘The Game,’ the book is framed that it’s the journalistic efforts of the book’s co-author, a fictional Alan Goldsher. There are blog posts, declassified records from the Department of Homeland Security, even Twitter feeds. These clever real-world puzzle-pieces form a believable tale as if it were to actually have happened in 2009.

Though clever they may be, Midnight Movie’s methods would have some greater strength if done in a more-visual medium. Hooper is a movie-man and he has done his best to adapt his movie-mind to the method of print. Now normally, I’m against the idea of turning every book into a movie (we’re at the point that in order to get an original idea made in Hollywood, there needs to be a book, game or poster first.) However, I would think that Hooper, given time and budget, could make a clever piece of cinema. However, since a part of the third act deals with the excruciating hell that is Hollywood, maybe wishing this to be made into a movie is a way to lose Hooper as a friend?

The ‘first person reporter’ situation might draw comparisons to World War Z, along with the use of ‘zombies’ in this book. However, Midnight Movie isn’t a zombie book; in fact, it’s more likely to George Romero’s The Crazies than Night of the Living Dead. I never got the impression that the affected in the book were zombies, but ghouls, victims affected by a plague. There’s a part in the book, specifically the in-book movie of Destiny Express that demonstrates the all-encompassing term of ‘zombie.’ Hooper was clever enough to detail this umbrella-term, especially it’s a young Hooper himself who speaks directly to the audience when he addresses it. You might be attacked by crows or by finches but lord knows, we call them both birds; they might be ghouls, voodoo or disease, but they’re zombies to you and me.

The story contains the gore and terror that is Tobe Hooper’s signature style. An interaction between the book’s main female protagonist and her ex-boyfriend contains Hooper’s prolonging-horror style that it might have been ripped out from Texas Chainsaw Massacre II. It was efficiently in capturing that idea of ‘despite your best efforts, the monsters are going to get you. You might think you’ve outsmarted them but at the last minute, they’ll snatch you up and gobble you down.’ It’s horrifying to watch but fun to read.

The second act tends to drag, since the story shifts slightly away from the cast of dynamic characters established in the first and focuses a lot on the effects Destiny Express has on the world. Hooper/Goldsher established some distinct voices with each of the characters not just in that first act but in the whole book; it’s that the ones I found myself attached to the most were in the first third of the novel. The second? Not so much.

In fact, one of the characters, Dude McGee, invoked some of my strongest reactions to a literary character in a long time. Though his physical appearance is described as “a low-budget Harry Knowles—big and bearded, but without Knowles’s charming sense of self-depreciation”, it’s his personality that makes me loathe him. He is a know-it-all, a slovenly lout whose grating demeanor got me. I actually had to pause my reading so I could skip ahead and find out if anyone was going to stop dealing with his sarcastic, gross tone and finally shoot him in the face. I loved that. That alone makes the book a success where they can make me hate something made out of words and imagination.

I don’t know if McGee was Hooper/Goldsher’s attempt to lampoon horror fans, or the type that seem to occupy Tobe Hooper’s world, but they created a wonderfully vile character.

There were a few other slip-ups, but they weren’t great detriments to the book. Despite showing their prowess in making distinct voices, having two unrelated characters use the same term for a fast-food joint (“Taco Hell”) was a distraction. Some of the excessiveness also worked against the book’s favor. The parts with Andrea Daltrey, whose affects of Destiny Express are more carnal than carnivorous (though there are bits of the latter in her story, as well) could have been slowed down. It seemed like her experience was fast tracked a bit too much that when her fate befalls her, there’s not that emotional connection.  It’s a shame but she was a servant for something greater and sometimes, we don’t get all that we’re due. Or, even worse, we get exactly what we have coming to us.

This is, what I think, the book’s ultimate underlining message. It’s presented in Tobe Hooper’s signature method, drenched in style and a grinning reassurance as the nihilism of life comes to reality. I think Midnight Movie falls perfectly into the Tobe Hooper oeuvre, that life is a tragic circumstance to be experience and endured without any kind of rational explanation at the end. Often, the survivors are left wrecked, traumatized and jaded in sense that those who died are the ones better off. It’s at the end of the Texas Chainsaw Massacre movies, at Poltergeist and it’s certainly at the end of Midnight Movie.

At the end of the book, there’s a brief Q&A with Tobe Hooper, explaining the autobiographical elements of Midnight Movie as well as his relationship with film and print. Hooper spoke about how he found film “limitless. [He] can do anything you can imagine, and because of that, it always is a challenge…” Similarly, there is a limitless appeal to the written word, but just like film, there are challenges. Though he has close to four decades of film experience, this is Tobe Hooper’s first novel, and a novel is a different beast than a film. As a first novel, it’s a successful step that allowed Hooper to test the waters. His voice and his style are adaptable to print. He concludes the Q&A stating he could do another novel. I encourage him to. Though with some cracks and bumps, overall, Midnight Movie is a good novel.  Fans of Tobe Hooper’s films will enjoy this and, even more, fans of horror and the culture around it will find it a chewy piece of reading to gnaw upon.

It’s currently on sale at all your major book retail options, both online and brick and mortar.