The Misfits, “The Devil’s Rain” 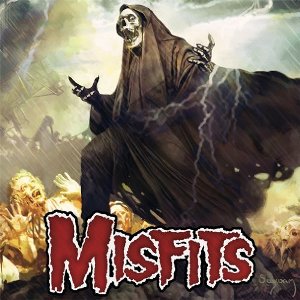 It’s not a Misfits record.

Not much needs to be said but I said it anyway. You can read it after the break.

I’ve never seen the Misfits. I first heard the band twelve years ago, sixteen years after the split.

I got into discussion with a weird dude named Saul about them. The Misfits were his favorite band and the incarnation that featured Michale Graves on vocals was heresy to him. I knew Danzig from “Mother” and another minor hit, “Can’t Sleep”, but had no clue what his deal was until Saul schooled me on why people gave a fuck about Glenn Danzig.

Despite writing all these words about horror punk and spooky music, I don’t have an emotional connection to the Misfits. I like the music and certainly think the boxed set is worth having. But compared to some friends of mine who have the Crimson Ghost’s grinning skull tattooed on varying parts of their respective bodies, my Fiend-force is weak.

So. For the first time in nearly a decade, the Misfits released a record of new material. And it’s all right, but it’s not a Misfits record.

Three years after I’ve written about the Misfits, a lot has changed. First off, I like Earth A.D/Wolfsblood now. Second, I think my writing has improved (I hope.) Third, yeah – Famous Monsters and American Psycho are kinda disposable. I still see the Michale Graves version of the Misfits as an okay horrorpunk band but not the Misfits. And that’s what The Devil’s Rain has done for the Misfits, once again.

If this was released by a band called Caiafa, it would be all right. It’s a punk record with some metal influences. The songs I really like were ones written by Dez Cadena (“Death Ray,” “Jack the Ripper”) which means nothing, really. The main surprise, I found, was that Jerry Only has a decent voice. I’ve only heard a shitty live version of him singing ‘The Monster Mash’ and he was coughing instead of singing the lyrics. If anything, The Devil’s Rain established that yes, Jerry Only can sing.

“Twilight of the Dead” is a song that tries to capture the magic of Danzig. The repeating chorus, the lyric arrangement – it’s like Jerry is doing his best attempt to sing a Danzig song. But Only isn’t Danzig. And this band isn’t the Misfits. It’s a good band and the songs are enjoyable. But c’mon. This isn’t the Misfits.