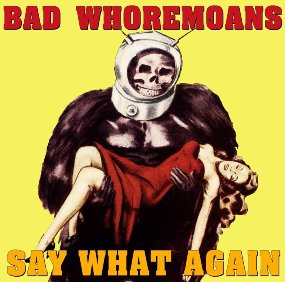 For the longest while, ‘SAY WHAT AGAIN,’ or the second Bad Whoremoans album, was widely unavailable. The first self-titled release has been spread along the internet like a cute-kitten viral video, but the second one? Until recently, many people (myself included) didn’t even know there was as second album.

But, now available for less than fast food breakfast combo, you can go purchase SAY WHAT AGAIN and you should. It’s a great album and when you compare it to the first release, there is definitely some visible growth as a band.

Just like another horrorpunk band from New Jersey, Bad Whoremoans have new versions of earlier songs on this release, with stronger renditions of “Surf Nazis Must Die,” “Lily,” and “Graveyard Girlfriend.” Both the music and the singing are richer on these songs and the whole album in general. The bassline is more developed in “Surf Nazis…” and all three new versions of the songs show more meticulous production.

The themes of death and rebellion against thoughtless behavior are present. I like the song “Better Off Dead,” because of its catchy song structure and chorus. It’s punk more in the vein of The Queers and Screeching Weasel, where “Deathmask” seems post-punk as a measured trudge, matching the subject matter of the song with the same dread-laden beat.

“Art School Bitch” and “I Don’t Wanna Be At Work Today” (the latter has Nettie singing with Paul doing backup) expresses a working-class element to all punk rock. The argument against the “Art School Bitch” is not the ‘art school’ or even the bitch, but the condenscending attitude of those who have never known what it is to lack something.

The Cramps’ influence is clear on “Transylvania Tramp,” so much as I wondered why Paul of the Living Dead was singing like that, only to deduce that this must a tribute to Lux Interior. I could hear Lux putting his vocal groove to this song and Paul’s vocals are great not just on this song but on the whole album.

‘Say What Again’ is a great album that shows a band progressing. Though they’re kind of on a hiatus, they always come back. A collection of B-Sides and Unreleased material will be released soon. Pick that up with ‘Say What Again’ and enjoy some kickass punk rock.

Bad Behavior has blocked 1077 access attempts in the last 7 days.