Things I Dig Up 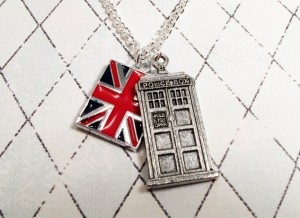 Police Box Necklace with Union Jack flag, inspired by Doctor Who and the TARDIS

“It’s too early for Christmas,” said Young Gus recently. Chronologically, it was correct. It’s the middle of November. There’s still the business of the American Thanksgiving to be dealt with, as well as various other holidays taking their place ahead of December 25th on the calendar.

However, for some, Everyday Is Christmas. To them, Halloween is a mere orange-and-black knock off of the true festive season. We remain impartial in the whole debate and if you have tattoos of spiderwebs or snowflakes on your arms, we judge not. The emotional investment ranges from person to person.

“Flip a coin,” says Strange Jason when pressed with the question about whether he ‘likes or doesn’t like’ Christmas. “Some years, it’s a nice holiday. Other times—” His motion of a gun placed against his temple doesn’t translate well into print.

“Love it,” says Glenn, the Sasquatch who was making a post-Autumn visit. “It’s not for everyone. But I love it. It’s such a nice break to the winter. Granted, I could just hibernate with those family members of mine but I was never for the old ways. Christmas, though.” A wistful look was recognized on the face of the Bigfoot.

Depending on whether you side with Gus, Glenn or the fifty-fifty Jason, you can partake in this week’s Tuesday uEtsy spotlight of Pinz n’ Thingz. 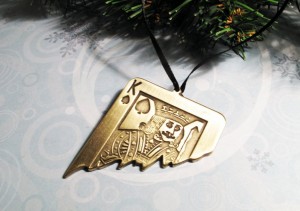 Some individuals are looking to have a tree up on Black Friday, while others might wait until the month turns to the final digit. A fanciful addition to your collection would be this Playing Card Christmas Tree Ornament, either expressing your commitment to games of chance or particular popular culture elements who have adopted the deck of playing cards as a format. Wild Cards. Gambit. The Royal Flush Gang. Pinz and Thingz can cater to your every geek, nerd and dorky need. 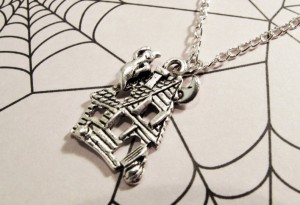 However, if you prefer to hold off on tinsel and evergreens, maintaining that black and orange look until it is far beyond timely (for you, Halloween never goes out of Season) there is this Haunted House Necklace. Know someone who would find this a great present? Do you want to get a kiss from a ghost under the ethereal mistletoe? Here is the perfect vessel to express your understanding, love and emotions in a season designated for charity. 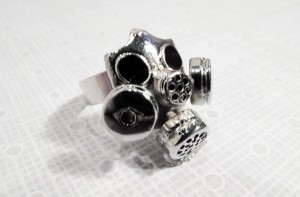 Of course, you can also be creepy as hell. Gas Masks, though highly valuable utility tools in cases of war and industry, are also pretty freaky looking. It’s really the only reason why anyone would fear The Mad Gasser of Mattoon if he/she were to return. You can celebrate that particular American horror or other creepy reasons we would prefer you keep to yourself with this fantastically creepy ring. 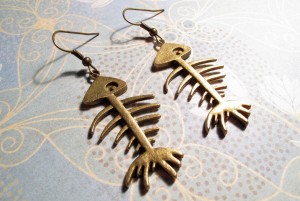 A documentary recently came out about the long-running band, Fishbone. Are these fishbone earrings related? We don’t know. Perhaps they’re related to the comic-strip, Heathclif? Or perhaps they’re a long-standing symbol of famine and a poor curse upon all fishing villages. Or perhaps they’re just nifty accessories for your ears. This is your choice. You can do what you want. You can have anything. 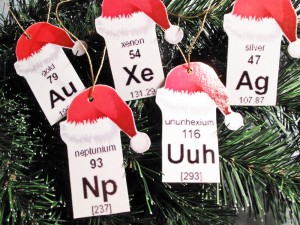 For the scientific person who wants to resolve their love for the basic building blocks of the universe and the problem of an undressed tree, here is a set of FIVE periodic table element ornaments. Want to show your unabashed love of Boron? Want to create a molecule of a certain nature on your holiday decorations? You probably have already bought three sets of these. Good for you.

For those of you still on the fence, go over to Pinz and Thingz Etsy page or their Official Site and see what they have for you. Whether you shop for Halloween, Christmas, yourself or someone else, have fun. There’s plenty there for you to enjoy. When you’re done, come back next week and we’ll have another Tuesday uEtsy for you.

Bad Behavior has blocked 849 access attempts in the last 7 days.