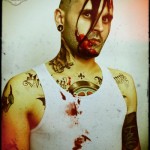 Reverend Leal came to Nasvhille by way of San Diego, CA. He was the director of the hit web based music show BalconyTV Nashville, but has just recently parted with the show to focus on shooting, directing and producing his latest project, Skeleton CrüeTV.

What is the worst thing you’ve ever done while inside a car?
I can think of one night in Fort Lauderdale FL…. but most of the really bad stuff happened outside of the car while I was driving. I guess technically I was “inside” the car during the whole ordeal.. and most of the blood did end up inside the car too… I’m just going to go with not using my turn signal.

Who would you least likely to see receive a prime time television show?
Jerry Seinfeld, hands down.

What is a part of your town (location, store, restaurant) that you think is under-appreciated?
It’s a toss up between the alley behind Layla’s Bluegrass Inn, where they hold the money knife fights ever Tuesday night or Rick’s Comic City… I don’t know.

What’s a movie do you think needs a sequel?
I’d love to see a sequel to Titanic.

If you weren’t in a band right now, which band do you wish you were in (and what would you play?)
I’m going to go with The Mighty Mighty Bosstones, and I would be that dancing guy.

Bad Behavior has blocked 1504 access attempts in the last 7 days.