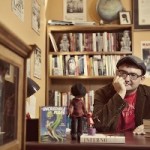 One of the noteworthy contributions to the genre came out last year with the cultural examination in ‘Monsters in America: Our Historical Obsession with the Hideous and the Haunting’ by W. Scott Poole.

From the bio on the book’s site:

Scott Poole grew up in love with monsters. Shock Theater on Saturday afternoon left him deliriously terrified as he watched Dracula, Frankenstein, Bride of Frankenstein and The Wolf Man. Comic books like Tomb of Dracula and fan magazines like Famous Monsters offered even more frightening fun…

…Somehow — and even Scott’s not quite sure how — he translated his love for monsters into a career as a historian and pop culture critic. A tenured professor of American History at the College of Charleston, he teaches a popular class about the image of the Devil in religion and popular culture and, of course, a class on America and its monsters. He is the author of several books dealing with race, religion and pop culture including Satan in America: The Devil We Know and is a regular contributor to www.PopMatters.com, an international magazine of cultural criticism.

What’s a book that you love that no one knows about?

I’m tempted to say Monsters in America. But I guess it would have to Matt Cardin’s Dark Awakenings, a collection of fiction and scholarly papers  exploring the intersection between religion and horror. Clearly influenced by Lovecraft and Thomas Ligotti, Cardin wonders aloud about how the more terrifying aspects of human experience are religious and the ways in which religion’s object of desire, the sacred itself, may be inherently terrifying. Thought provoking, not for the philosophically faint of heart and deserves to be more widely known.

Was there a particular moment/instant that you can credit as the inspiration of your latest work (editor’s note: in this case, the motivating moment/instant behind your book?)

Where would you prefer to live if the Witness Relocation Program finally has to move you?

Some kind of science station in Antarctica. Either the one from The Thing or the one from Whiteout, but without the aliens or the murders or any of the people. Then again, I couldn’t live away from record, comic and bookstores, so actually maybe Brooklyn. Bed-Stuy or Park Slope, not Williamsburg.

What’s the Valentine’s card you would design if given free range and no censorship/supervision?

I want to send Valentines to dead people, at least interesting dead people. So, I suppose I would design a card and a card company that would allow you to send a valentine to, say, Elsa Lanchester or William S. Burroughs. I’d even have dummy addresses where you could send the cards to in order to give you the feeling of being a real live crazed fan of a real live dead person. So, for example, you could send one to Elsa Lanchester at 1935 James Whale Avenue, Hollywood or something. Come on, surely there is a constituency out there that wants to stalk dead celebrities much as I do.

If you were to insert yourself as a character in a television show, which show would it be?

Possibly Seth Green’s Oz from Buffy so that I would a.) get to be a werewolf b.) date Willow Rosenberg c.) get to wander in Romania and Tibet visiting various spiritual masters. Or maybe Stringfellow Hawke from Airwolf. As long as I didn’t have to play the violin or fly high-tech helicopters and could just do the whole “brooding recluse in a mountain cabin” thing.