A Handful Of Dirt: THE UNDERTAKER of HauntedHotsauce.com

Evil Bong 3: The Wrath of Bong 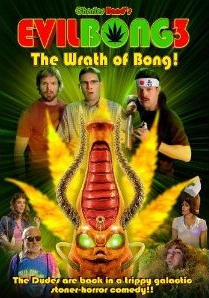 Alister, Bachman, Bret and Larnell really thought they had seen the last of any evil talking bongs after their last adventure. But although they drifted apart as a group, the arrival of a meteor containing an evil space bong will soon reunite them. After spiriting off two of their friends and announcing its plans for global domination, those remaining are forced to team up with an unexpected ally to stop this sinister invasion: The original Evil Bong!

Although seeing the rest of the film has improved my attitude towards the film since I reviewed the 22 minute preview disc, much of my original criticisms still hold true. Don’t get me wrong, I enjoyed the film. Although I think the last horror comedy from Full Moon I reviewed was funnier, this runs a very close second. But when you have “bad day for night shots,” scenes were you can see the tops of the set not connecting with the ceiling and other such flubs, it’s hard to tell if they’re intentional jokes or embarrassing errors. While the film does try to explain why the “bong planet” sets are so cheap looking, the “they’re trying to create an environment to placate the human mind” explanation doesn’t seem to hold water. Nothing changes when various people come to the planet and while I appreciate the parts of the planet with extra props and black light effects, it still felt like things could have been much better realized. It also strains credibility that anyone from the past two films could have seen the space bong and not immediately realize that trouble was brewing. But, on the plus side, a lot of the jokes worked and the actions intended to take advantage of the original 3D showing weren’t nearly as obnoxious as I thought they would. One such example is the character Nurse Hookah, whose pantomiming the dialogue said by her employer grew on me and never felt forced.

I should note that the Pre-Release Road Show Exclusive Edition I’m reviewing removed the prompts for using the Sniff-o-Rama card (which is not included) and the widescreen transfer, while beautiful, is not in 3D. While there are chapter stops, there is no chapter selection menu and the only extra is the trailer. The audio, aside for a few times the music was softer than I would have preferred, is very good.

Unless you’re a hardcore fan of the series, I recommend renting this first before deciding to purchase it. Although it is possible to enjoy the film without seeing the previous two films, I suspect that viewing them beforehand makes for a smoother viewing experience. Only time will tell if the same can be said for the film announced at the end, Evil Bong vs. The Killa Crack Pipe…