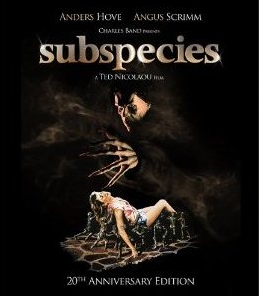 When Mara, Michelle, and Lillian traveled to Romania to study local superstitions for a college course, they had no idea the legends of vampires in Castle Vladislas were true. They also had no idea their new friend Stefan is actually a vampire at war with his evil brother Radu over the Bloodstone, a sacred relic that oozes blood. But these facts soon become aware to them and the fight for their lives begins. But with both brothers desiring Michelle and Radu’s ability to generate creatures from drops of his blood, this won’t be a typical vampire movie.

Since its release in 1991, Subspecies has proven to be a popular franchise for Full Moon. Although it doesn’t have as many installments as the Puppet Master series, the Subspecies franchise is still a force to be reckoned with despite the last installment having been released back in 1998 and Subspecies is well-deserving of its status as a classic Full Moon film. The titular subspecies, while obviously there due to Charles Band’s fascination with little monsters, are an admittedly interesting addition to the vampire myth, as is the Bloodstone. Speaking of effects, Radu’s makeup effects are both very impressive and return the character to the original concept of vampires as vile, corpselike monsters rather than romantic heartthrobs. Also adding to the overall effect are horror legend Angus Scrimm’s cameo and how it was filmed in Romania (aka where what used to be Transylvania is now located).

For this 20th anniversary Blu-Ray edition, Full Moon Features has presented a beautiful widescreen transfer and great stereo track. This must make a huge difference to those who have only seen the original, cropped VHS version. As far bonus material, there’s the informative VideoZone segment from the original release featuring around 10 minutes worth of behind-the-scenes goodness. My favorite part was when footage of the original (but abandoned) method of realizing Radu’s minions via men in costumes was shown. While I agree that David Allen’s stop-motion creations are much better looking, I do appreciate being able to see the rejected material. There’s also widescreen trailers for Evil Bong 3, The Gingerdead Man 3, Killjoy 3, Demonic Toys 2: Personal Demons, Puppet Master: Axis of Evil and Skullheads. Bizarrely, there are no trailers for any of the other Subspecies films, let alone spin-offs like Vampire Journals or the pseudo spin-off Decadent Evil series (all of which are available on DVD).

Here’s another piece of news that should be of interest to Subspecies fans: Full Moon has announced a fifth installment of the series! Here’s hoping we’ll continue to see more of Radu and his minions in the future!