A Handful of Dirt: Jim Warfield of Ravens Grin Inn 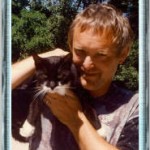 Jim Warfield has been drawing and painting since he was 5 years old.  But it wasn’t until he was 38 that he was able to publicly show off his creativity in the guise of the Raven’s Grin Inn.  Part performance art, part art gallery Jim has become internationally known for not only his sense of humor and tours of his home but his ability to capture that same essence on paper and canvas.

Through luck and your uncanny skills at politicking, a significant portion of the world is named after you – where can we go to visit and what will we find when we get there?

Visiting that part of the world would only require a good night’s sleep because my part of the world would be a nocturnal dream playground of history (See “History’s Dumpster ) I have been there many times . The funny thing about it  ona technical side, is the indirect lighting. How does that work? I see no origin for the illumination, it’s not very well lit, just enough and we are all internally underground, inside our own mind’s synapses where history really does lie in wait via DNA micro circuits which are also one with everything that has passed before, as we were also there, in part, at least.

There is the old familiar ravine of cliffs and gullies and architectural parts and pieces of failed civilizations here and there, arranged not on top of one another but clear delineated for examination and enjoyment. No weather there, there is a roof an unseen one, filing these odd things away for ever.

You’re on a date with someone – they suggest catching a late night feature. What’s the title of the movie that makes you think “this one’s a keeper?”

“You are such a guy, Herman, war hero, flying high above that hell on earth battlefield as I ran for my miserable life between the explosions all around me carrying scraps of paper back and forth as commanders had to tell each other that we were all dying there! How did you get to become a pilot?”

“I wish you wouldn’t ask such questions when we are in bed together, Adolf, it kind of distracts me and actually helps to kill the “Mood”.

“Just tell me if I’m “Hot” or “cold” when I give you a few of my guesses about that question that you don’t seem to wish to acknowledge, OK?”

“Can we do this with the lights “off”?

“NO! Positively NOT! Nein!”

“No! Don’t crap the bed again! At least stop yourself until I’m in position right under you, OK Love? You do make a real mess of shit, Herman.”

“Well, what are you going to call it then?”

“Very clever, Herman, coded so the spies will not be able to figure out what were are building, since we are in violation of the accords. They will think it’s a sewer plant”

“Then when we engauge our full forces upon the unsuspecting world. they will be engulfed in that Mess-Of Shitt!”

“Swarms of shitters streaking across ..’

“Pay attention to your bodilly functions at least a little bit, please!”

“You have a moustache, Adolf.”

“OH, well why did you shoot your Cousin anyway?”

“It was a misfortunate accdent, Herman.”

“Well, for Geilie, it sure was since her brain got deflated so quickly that dual snots pooped out of her nostrils half-way across the room!”

“All that brain -pressure pushing down on those mucus glands…”

“What color of a beard would you like this time Dolf?”

“Calm down Dolfer, you don’t want to start a war with me!”

“Well then, who may I start one with then?”

“Here, have a dart. Throw it at the map over there.”

What is the horror movie you like that most other people hate?

I like some of the old horror movies that were black & white Silent masterpieces like “HAXAN” and Most of the rest of them made under such dire, crude circumstances when it must have taken a great deal of work to find financing and crew, ex cetra to even make anything happen , let alone the incredible products that came out, I mean they are just amazing works.

There are scenes in Haxan you will never see in another movie.

I must correct myself. The first time I saw Haxan we didn’t know there was a sound track, it’s in Danish? But it is a very old movie, maybe the sound track was added much later? Hard to tell when they are speaking in another language

What game would you make an Olympic sport?

US Men’s Bikini Thong roller blading team. My wife’s favorite sport from the comedy TV show The State, they did that.  Mine?

I think the 120 yard backwards hurtle dash. Imagine seeing trained athletes running backward  at high speed jumping the hurtles by guessing , counting steps, what a nutty watch this would be!

Maybe the product spin off would create items for other people in other occupations, ex cetra from this endeavor?

The odd stresses placed upon a body running backwards might also lead to new health practises, exercises and the next thing we will be seeing would be the  class on “Biggest Loser” running backwards!

Redesigned shoes would be needed too. Maybe a special Winter race could be run through a snow-covered maze at night with a Jack Nicholson look alike chasing them?

This would be a kid’s race of course.

If you could use a mind control ray to contact every mind in the northern hemisphere, what would the message about a particular project you’re affiliated with (editor’s note: in this case, Ravens Grin Inn) that you would transmit?

Mind control over other people?

My message would say:”You need to be happy? You would like to feel better about life and self?

You are smarter than they tell you, you know.

You can be a happier, better person, yes you can.

Treat people better and most of them will think more highly of you. (I told you it was selfish, it is “about You”)

Maybe you just need a better night’s sleep to make it all happen?

After a day or two of making smarter choices and treating others better, you may find yourself laying down for the night more relaxed, less guilty, which can give you a better rest and when you wake.. you will feel better from all of the things I have just described.

We all have choices every moment, to frown or to smile, to say something nice or be somewhat nasty or to say nothing at all. Being a smarter person , you know you Do Have the choice in any situation.

Want to be happy? Happier? Go for it! Be selfish and be a smarter, nicer human being, sleep at night.

The pleasure of a happy guilt-free mind is addictive. Let everyone you deal with everyday help you to achieve this, you need them to help, we all do.