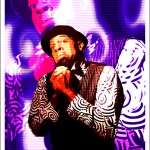 Author/Graphic Designer/Actor John Dimes is happily affiliated with the television show Spooky Movie Television as the character Dr. Sarcofiguy. He has authored the books Intracations, The White Corpse Hustle: A Guide for the Fledgling Vampire, The Rites of Pretending Tribe, and There Are No Bad Movies (Only Bad Audiences).

His comic book Gurlimann’s Bizaare Bazaar received 3 out 4 Skulls from Fangoria Magazine, and a “Dimes gets props for having a villain based on Charlie Chaplin,” from Ain’t It Cool News.

You can find out more about him on his website at: www.johndimes.weebly.com.

If you were the host of a late night talk show host, who would you have as your band?

My favorite most obscene/tongue-in-cheek band in the world to have on my show would be THE TIGER LILLIES. They’re from the U.K., and is described by some as Tom Waits on helium. That’s a true thing. I’d have them sing “Push A Baby Down The Stairs,” from their album “Urine Palace.” They’re brilliant, I tell you!

If you could resurrect a film actor, who would it be?

Can I answer with whose career I’d like to see euthanized first? Nicholas Cage. Where’s Dr. Kevorkian, for chrissakes?! Oh, he’s dead, idn’t he?! Heh. I definitely would resurrect Vincent Price, though. That there was an AWESOME actor. An awesome personality. Or Peter Sellers. No more Pink Panther stuff. But I’d definitely like to see him around some more. I loved him in the movie “Being There.”

We’ve woken up and in this universe, you are the driver of a car for NASCAR. Who is the main sponsor of your car?

A FOX executive (suspected of being under the influence of a serious of highly fashionable illegal substance) gives you carte blanche to design a game show. What do you come up with?

I’ve actually thought about this before, but you’d have the world’s most horrible bosses imaginable on the show, only they don’t know they’re horrible. You have a bunch of them competing against one another. They are asked a series of questions like:

1. How often do you reprimand an employee in front of other employees?
2. When is it all right to hover over your employees as they are typing a memo, or carrying out day to day tasks?
3. How often do you talk about your employees to other employees and staff?
4. When you have a project that has a 6 month deadline, do you start it immediately, or start it a month before the end date because you know you can galvanize the troops into getting the task done effectively?
5. How much confidence do you believe your staff and employees have in your leadership abilities?

Questions like that. Basically you give them a multiple choice list which are of course tied-in with the requisite percentage points. If by the end of the show they have garnered enough percentage points of how outrageously horrible a boss they are, then the person who nominated them for the show wins cash and prizes, while the bosses are exposed for the idiot he is. It would be hosted by Judge Judy! I’d name the show “THE CONFEDERACY OF DUNCES.” after the novel.

What is the number one bit of romantic advice you can divine for those who are unlucky in love (editor’s note: perhaps tying the advice with the upcoming Valentine’s Day  Season?)

Hygiene is so important. If you try to kiss someone, and they can smell you before you reach them, you should think about that. Understand boundary issues and whether you have them. Wait for the “High sigh,” for permission to board a person. And lastly, and most importantly, if you’ve finally found someone who has consented to be seen with you in public, and they ask you the question, “Would you die for me?” Your answer should not be “No!: Instead, answer with the following: “Should the event present itself, I’d try my level best make sure we BOTH survive the experience!” In short: Chivalry is never dead, only slightly wounded. Or at the very least, it should be mildly singed!