Joss is Less or some stupid title.

I don’t like the work of Joss Whedon because I think his storytelling relies far too much on the complex, over-reaching ideas/ arcs than focusing on the basic principles. I think he values being clever more than being good.

Further research into Cabin In The Woods ultimately sank a prior post I had previously written, comparing it with The Hunger Games, detailing how the nameless, faceless government/industry/entertainment entity has taken over as the go-to antagonist. I even quoted Lovecraft, when he wrote “[t]he oldest and strongest emotion of mankind is fear, and the oldest and strongest kind of fear is fear of the unknown.” The internet has killed off a lot of unknown, though it hasn’t done much for ignorance. We know of a lot more and it’s far too easy for a lot of people to know of something or someone. Slashers came about with fear of strangers and that fear is still alive, but the product–specifically, antagonists with identifiable personalities–have gone out of style.

The more I don’t know about Whedon’s work, the less I loathe it. I was willing to write off Cabin In The Woods as another sci-fi fuckall that Whedon is known for doing. But I actually looked into the movie to see what it was about, and read an attributed quote on how “The things that [Joss doesn’t] like are kids acting like idiots, the devolution of the horror movie into torture porn and into a long series of sadistic comeuppances. [co-writer Drew Goddard] and [Joss] both felt that the pendulum had swung a little too far in that direction.”

SHOCK! For a moment, I thought I agreed with Joss Whedon. Maybe I do?  But further reviews, specifically to those at Rotten Tomatoes, point out that yes, I can rest easy tonight. Joss Whedon Sucks A Big One. 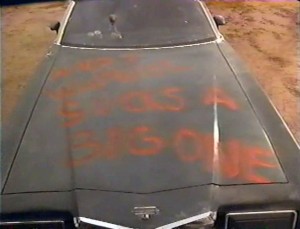 Replace 'Andy Warhol' with your scornful artist of choice.

From the reviews, it sounds like it’s a bloated version of ‘Stay Tuned’ mixed with ‘Scream’ and the ‘Truman Show.’ Will the movie make money? It’ll make back its 30 million budget, sure. The sliver of the population who want to see a half-cast reunion of ‘Dollhouse’ will make sure of that. But if the movie changes the genre, I’ll be stunned by the lack of taste in all of you.

Instead of going on about this, I’m going to listen to LiveFastDie and wait until God Bless America comes out.