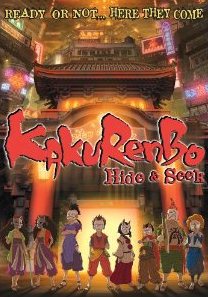 Story goes that children who go to an abandoned city after dark get to play hide and seek with demons. In an effort to find his sister Sorincha (who vanished while playing the game), a young boy named Hikora and six associates he’s rounded up go there to investigate. They soon find that the story is all too true and find themselves stalked by a band of demons…and a mysterious eighth player that seems to be the Sorincha…

While short (it’s only around 25 minutes long), Kakurenbo (“Hide and Seek” in Japanese) does manage to have authentic “urban legend” feel to it. In order to play the game, you have to have seven kids that are all wearing fox masks and you have to follow specific signs to “cross over,” which mirror similar tasks one has to do in various urban legends across America. Some play because they want to find lost siblings, some wish to aid their friends and others simply want to prove their bravery. As the popularity of the previously mentioned real-life legends show, there are plenty of people, both children and adults, who would willingly play a game with demons as part of a stupid dare or overwhelming curiosity. The film starts with a great quote by folklorist Yanagida Kunio, noting how he never played hide and seek at night out of fear that ogres would take him away. Another bit of Japanese folklore that helped inspire the story is that when children play tag in Japan, the person who is “it” is referred to as the “Oni” (the Japanese term for a demon). While the nature of the storyline admittedly wouldn’t work if stretched out to feature length, I wish they had been able to expand on the story a bit more. I found it odd that the each of the demons were given designated titles like “Liver-Taker” and “Oil-Taker” and yet none of those characteristics are put into play. The combination of cel-shading and computer animation makes for an interesting look (I especially loved the architecture). That said, I suspect the reason the characters all kept their masks on is to save money by eliminating the need to animate facial expressions.

Made in 2004, Kakurenbo was shown in various film festivals and eventually had its world television premiere in dubbed form on Cartoon Network’s Adult Swim in October 2005 as a Halloween special. Like many who have discovered the film, this was how I first saw it. Sadly, it was released around the beginning of the US anime industry’s implosion. It’s US distributor, Central Park Media (aka US Manga Corps), announced its financial woes and layoffs the following year. That same year, Tech TV got rid of “Anime Unleashed” and several distributors released what turned out to be their final new titles before eventually closing up shop. Just as the demise of World Northal killed off Kung Fu Theater and its ilk, anime started to slowly vanish from the airwaves. Hell, Apollo Smile eventually dropped her “live action anime girl” persona!

In other words, Kakurenbo didn’t receive many showings on television after its premiere (at least, none that I can find) and was only available on DVD. Since Central Park Media went out of business in 2009, said DVD has long been out of print and is being offered for outrageous prices on Amazon. I have not seen the DVD, but understand that it includes some other anime shorts, production art galleries and even a commentary track (in addition to providing the original Japanese version with English subtitles) to make up for the film’s short running time. So, barring you finding it for a song in a used DVD bin, rental is the only way to go. Well, that, and the ending is ridiculous enough to kill some of my enthusiasm for recommending it as a purchase. Explaining why would only spoil it, so you’ll have to snag a copy for yourself to see what I mean. But if you put that aside, it’s a nice bit of creepy fun for both anime and horror fans to enjoy.

Although my above take on the US anime industry might seem extremely downbeat, there is still hope. Many titles from the now dead or inactive companies have been picked up by the survivors, there’s a new Asian programming-themed cable channel that carries anime and Toonami might even be making a comeback! Who knows, we might even see Kakurenbo become more accessible again.