A Handful Of Dirt: Ray O’Bannon 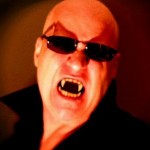 Ray is originally from Nebraska. He moved to Wyoming in the 80’s and studied art at Casper College. His devotion to horror fiction led him to begin posting material online in the 90’s. Although his website, ravensblight.com, is most notable for it’s free paper toys, Ray also enjoys composing music, writing short stories, painting, photography and making short films. He can’t be bargained with… he can’t be reasoned with… he doesn’t feel pity, or remorse, or fear,  and he absolutely will not stop, ever, until he realizes he’s out of coffee and might like a sandwich.

Who is the 80’s/90’s television character you find the most relatable in the year 2012?

I watch very little television, but I do seem to remember it involving characters of some sort. As I recall, they were quite anxious to have me try a particular brand of laundry detergent.

What movie (or movie-based reality) would you like us all to live in?

It might be interesting to inhabit the world of The Blues Brothers… everything’s pretty much the same, yet wildly improbable miracles happen frequently (and everyone you meet starts singing and dancing.)

What or who do we blame for inspiring you to take your life down this chosen path?

I’d have to blame EC comics for introducing me to a fellow named Cain and his House Of Mystery back in the 70’s. Also, Dark Shadows brought Barnabas Collins into my life in the late 60’s and I’ve yet to shake off the effects of that. If you throw in the Munsters, Addams Family, Night Gallery, and Carl Kolchak… well, I obviously never had a chance.

What is the most noteworthy item you’ve found on sale at a flea market/yard sale/classified ad?

What’s the name of the speciality magazine that you start up (bonus question: who’s on the cover of your first issue?)

It would need to include paper toys to cut out and assemble, and a cardboard back with a little 45 rpm record stamped on it (like they used to do on cereal boxes). I realize not everyone still has a 45 rpm record player, but I seldom clutter my creative thinking with such trivial things as ‘facts’.

Bad Behavior has blocked 1040 access attempts in the last 7 days.