As you might recall from my Venus Coin Trap article, I made a passing reference to having received the Little Shop of Horrors-inspired Milton Bradley game “Feed Me!” as a gift many years ago. Whereas the Venus Coin Trap appears to be based on the depiction of Audrey II from the film’s poster, “Feed Me!” seems to be based on Audrey II’s (for lack of a better term) “speaking posture” that is used for most of the film.

As this was intended as a children’s game, certain “scary” aspects had to be removed from the design. Well, that and I imagine that avoiding legal action from the Little Shop of Horrors people was also a factor. In any case, the game’s plant lacked teeth of any kind and the inside of the mouth contains a yellow flower rather than a tongue. I’ve long since lost everything but the plant, but I also recall having to drop red marbles into the plant’s mouth (which some have claimed were supposed to represent blood). If you want to learn how the game itself was actually played, you can actually download the game’s instructions online! 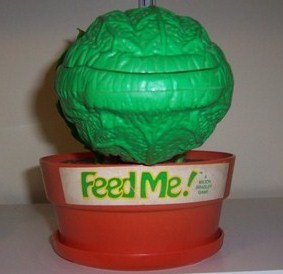 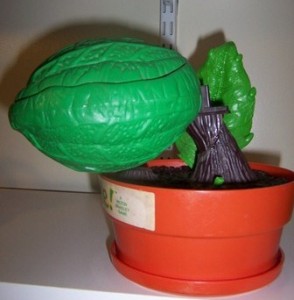 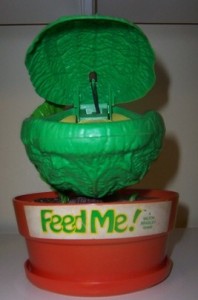 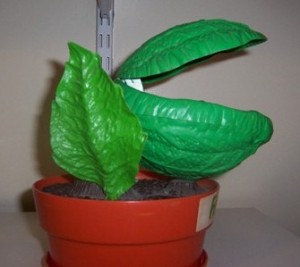 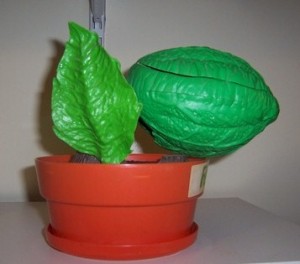 As m is very old, it’s taken a lot of damage over the years. Two of the three leaves have broken off and a lot of the minor vines and such have gone missing. If you look closely, you can see where the head broke off and had to be glued back in place! If you want to see what it originally looked like (or what the packaging looked like), I highly recommend visiting its profile on BoardGameGeek. Although I’d never throw my beat-up version away, looking at that site makes me want to head over to ebay and pick up one that’s in better condition. Then again, I’ve never gotten any complaints about the quality whenever I’ve used it as a decoration at Halloween parties and homemade haunted houses (usually with a fake bone nearby or stuffed glove sticking out of its mouth), so maybe getting a new one isn’t necessary. That said, I really should get some strands of fake leaves from the dollar store to fill out things more and cover up the sign on the plant’s pot (or at least cover up the notice about it being a game. If I had the necessary skills, I might even be able to make a mold of the remaining leaf and use it to case replacements for the two other missing leaves. 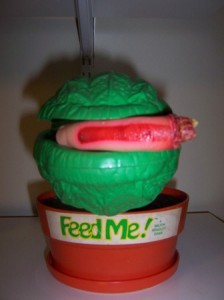 While doing some research for this article, I came across some exciting news: there’s an upcoming DVD/Blu-Ray release of the film featuring the original ending where Audrey II goes on a classic giant-monster style rampage! Whereas the version used on the recalled DVD was an unfinished black and white print (which was only used since the studio’s color print was destroyed in a fire), this release will use the completed color version. It’s interesting how, although this ending echos both the original film’s ending and the stage version’s downbeat endings, it does so in a way that goes far beyond either.