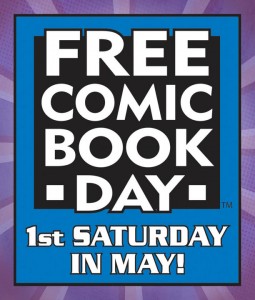 At long last, it’s Free Comic Book Day! But although all the free stuff is great, it’s not what makes the holiday so important. Instead, it’s spreading the word about both comic books and comic book stores. It’s been said here before and I’ll say it again: Comic book stores are an invaluable resource for not only comic books, but also horror-related magazines, DVDs, toys, trading cards, models and so much more and they really deserve our support. So please spread the work and consider buying something along with picking up your free comics.

Thanks to the photo gallery at the Free Comic Book Day Facebook page, I’ve compiled a list of all the free “Silver Books” that might be of interest to our readers:

As for the “Gold Books,” there’s only a single sci-fi/horror-related title:

And as a special bonus, here are some links to past Gravedigger’s Local 16 articles dealing with comic book-related subjects:

Special thanks to the organizers of Free Comic Book Day for use of the image!