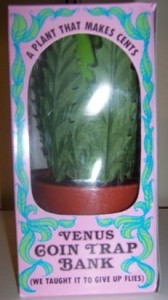 You probably saw the above-pictured novelty bank numerous times in the late 80’s through the early 90’s. It’s often referred to as the “Little Shop of Horrors bank” or the “Audrey II bank,” but its actual name is the “Venus Coin Trap” bank. Why? Because it was designed to cash in on the 1986 Little Shop of Horrors musical film without the makers having to pay any licensing fees. Frankly, I’m surprised nobody has tried to take advantage of the original film’s (supposedly) public domain status and used that version’s design for the various Little Shop of Horrors influenced products rather than tempt fate by clearly copying the plant in the then-recent film. In fact, the plant in the original film is actually called “Audrey Jr.” rather than “Audrey II.” But I suppose that even using the original’s name would have the lawyers come a-calling.

As a young horror fan, I desperately wanted one, but could never afford it. My father once offered to buy it for me, but accidentally purchased Milton Bradley’s “Feed Me” game instead. While not what I had wanted, I was still quite taken with it. Flash forward a few decades. I had remembered the elusive bank and decided to track it down online. My search eventually led me to Amazon, where I found it under its proper “Venus Coin Trap” name. I had a giftcard handy, so I immediately ordered it.

When it arrived, I was very pleased to see it had the same packaging I had remembered from when I encountered the plant at a joke store many years ago. Prior to that, I had only seen it out of its packaging on display. Let’s have a look at said packaging: 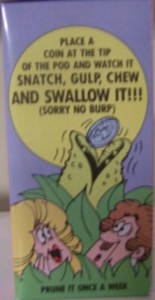 I was so bummed to see the “Sorry No Burp” notice. I had never seen the bank in action before and had always assumed it was just as impressive as the other novelty banks of the time, like “Robbie the Robot.” I had always imagined that it would call “Feed Me” until someone gave the plant a coin, which it would nosily gulp down and chewed, with a noisy belch after its “meal” was completed. 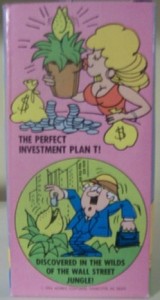 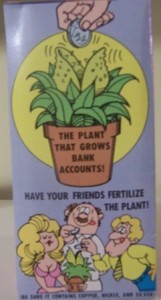 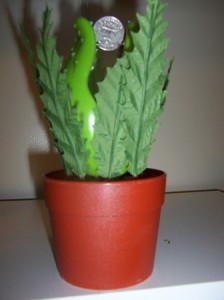 Let’s take a closer look at the plant. The leaves cover up most of the plant (as you can see via the packaging’s clear plastic window), but are flexible and can be bent into whatever position the owner wants. I bent them a little in this article’s pictures to show off more of the plant itself, while still trying to cover up the bulk of the plant’s largely undetailed surface. 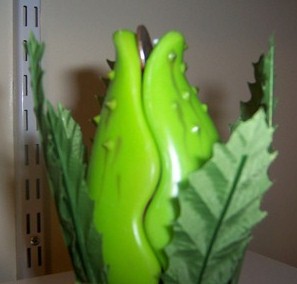 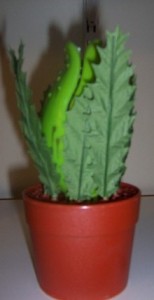 As you can see in this image, there are metal prongs in the bank’s mouth that form an incomplete circuit. When the metal coin touches them, the circuit is completed, which activates the bank’s mechanism. Sadly, my bank doesn’t work, so I can’t describe how the plant “eats” the coin (much less film it like I had originally planned). I don’t blame the Amazon seller I bought it from, as the construction is rather flimsy and I almost damaged it merely trying to remove the battery. I imagine that the packaging’s description nicely sums up what happens: The mouth opens, the coin falls in and is “chewed.” Said coin can be removed via a compartment at the bottom of the plant’s pot. I suppose I could have tried exchanging it or sent it in for repairs, but that would only cost more money for some a feature I’d maybe use every so often. Besides, I mainly plan on using it as a spooky display item on Halloween. Don’t even try to tell me it wouldn’t look cool under dim lighting and with a fake severed finger held in its mouth. 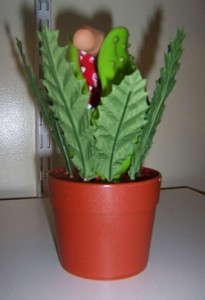 UPDATE: I found a video of the Venus Coin Trap in action!

Bad Behavior has blocked 771 access attempts in the last 7 days.