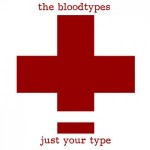 The Bloodtypes
Just Your Type
[Audio:http://www.gravediggerslocal.com/wp-content/uploads/2012/06/The-Bloodtypes-Just-Your-Type.mp3]

Despite being type O-Negative (seriously. I have the card to prove it) I never was into slow trudge. I like my blood to be flowing freely, like the punk rock of the Bloodtypes on ‘Just Your Type.’

Glad in white that is liberally splattered with the stuff keeping you alive, the Bloodtypes aren’t vampires, aren’t ghouls but punks from the Northwest Portland. Having released their first full length album, they are a well needed infusion. They will get you moving.

“Anti-Social Media” is their punkest song. “Gotta Get Away” is a catchy anthem for warmer weather and “Kats R Punx” is just a fun song. The literal centerpiece of the album is the title track, “Just Your Type.” Highly recommended

Smartly, the album hooks you in with “Be A Man,” the song that really got me into this band. I.V. Frehley’s guitar and Jesse B Negative’s bass are the two hands that grip your shoulders while Matt O Demic’s drumming move your legs. All while this happens, you’re focused on the sound of Schneck Tourniquet’s vocals and synths.

The resurgence of the keyboard as a present member in the rock-lineup might bring a bit of wariness about the listener. I know that if I see a band I don’t know set up a keyboard, I preemptively wince. A lot of hipsters must have dug around the dollar Vinyl bin and suddenly think Fleetwood Mac was a good idea. The Bloodtypes weave the instrument masterfully into their music so that it never becomes a novelty. The music on ‘Just Your Type’ could be found anywhere in the last three decades; it would never be out of place and it will always be the same powerful record of quality punk that it is today.

Comparisons between the Bloodtypes and another Portland-snyth-fueled band are bound to be made, since both the Bloodtypes and The Epoxies are fronted by women who can kick your ass and sing circles around you. They also share a common member (Jess B Negative, transformed from his FM Static persona.) The Bloodtypes are dirtier, in a positive sense. The guitars are more rusty razors, the rock more garage surgery. The Epoxies were of an idea, an idea whose time has passed (and we are lucky for being around during that period.) The Bloodtypes are accessible by many. They’re the universal donors. Get them in your system and feel your pulse throb.