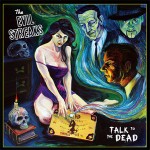 Those attending the Friday the 13th performance by the Evil Streaks were given a surprise as their first full length, ‘Talk To The Dead,’ was unleashed ahead of schedule. The album is a supernaturally fuelled collection of thirteen songs drenched in electric voodoo, blood-coated distortion coming from the haunted amp.

The Evil Streaks are the continuation of the Necro-Tone brand and ethos, one of no-bullshit rock and roll, dashed with surf, mixed a touch of punk and metal. John Kozik (The Crimson Ghosts, The Demon Seeds) and Myra (Ghoul’s Night Out, Gein and the Graverobbers) were in an early band called The Disconnect, but it lasted only a few performances before the ethereal energy maintaining its presence in this material world dispersed. Luckily, neither John nor Myra were deterred, and picking up Rev on bass and Jim on drums (a position once held in the band by Necro-Tone family member, Sloth) the Evil Streaks rose out of the premature tomb, tore away the shroud and gave the world a new way to rock.

Following up the ‘Go-Go To Hell’ ep, ‘Talk To The Dead’ is an organic blend of style, taking primary and secondary hereditary traits from prior Necro-Tone incarnations and giving everyone equal billing in spotlight. There are instrumental tracks (“Marble Orchard”, “Haunted Heart”) and straight garage-flavored singles-with-a-bullet (“Dirty Little Secret,” “Strike A Chord”) with plenty of horror (“Pumpkin Carving Party,” “Devil’s Mark.”)  A cover of April March’s “Chick Habit” fits in better than it should; it’s a cover song that doesn’t sound like one.

A highly enjoyable kick to the pleasure center of the bran, ‘Talk To The Dead’ is a showcase of the past, the present and the future of both The Evil Streaks and rock and roll. Though they often play to scenes celebrating the days of yesteryear, the group doesn’t seem ready to idle on their own heydays. There definitely is the straining of sinews and the reaching of hands from behind the bed in displays of growth, all done in a way that doesn’t sound disjointed or at war with itself. This is a great album, one that mixes together like a fine, foamy drink served at Otto’s Shrunken Head right before you wander into the back room to watch the Evil Streaks perform.

The sound on the album is fuzzier than earlier releases, fitting for the subject matter; this is said in passing notice, as it is not a detriment to the overall sound or the miasma that wires through my ears. Perhaps I’m going deaf? Perhaps the record is haunted, and that what we’re hearing is the unreality seeping through the cracks. Maybe the Evil Streaks are earning their comparison to the Cramps by being the resurrection of that music which bore Lux and Ivy, the return of the sound breaking the seals set by the dying acts of unsung guitar slingers while charlatans and false prophets have paraded around.

The addition of the Farfisa (lent by the skillful Jenn Brunell) throughout the album was great and allowed for a new version of “All Good Things,” giving it a new flavor on one of the better songs from ‘Go-Go To Hell.’ If the organ becomes a permanent fixture in the sound, time will tell. If you need any clearer divination on the subject, you’re in luck. As the wonderful cover art, an original painting from Haig Demarjian (of Die You Zombie Bastard! fame, found online at www.artofhaig.com) showcases Myra in full use of the automatic spiritual conduit, the Ouija board. Each album comes with its own rendition, allowing you to talk to the dead yourself.