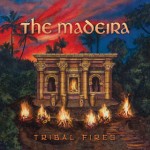 If you’re a fan of surf music, you more than likely already own ‘Tribal Fires’ by The Madeira. It’s forgivable if you don’t, but until you do, you’re going to get a stern look from everyone around you. RIGHTFULLY SO, I might add.

The prevalent theme of ‘travel’ among The Madeira’s oeuvre continues in ‘Tribal Fires.’ Placing the four releases together, a narrative forms of a band of men starting off in an unforgiving desert (‘Sandstorm’) that leads them through a desolate civilization of long ago (‘Ruins’) before night falls (‘Carpe Noctem’). Their journey leads them across a great ocean until they arrive in the deepest jungles of a dark nature, fires guiding their way down the African continent.

Similarly, I think that the members of The Madeira aren’t content with letting the grass grow under their feet musically. There is a noticeable difference between ‘Carpe Noctem’ and ‘Tribal Fires,’ a refinement that is near ungodly. The quality of surf music on this album is unreal.  I literally had to stop the player after hearing the opening track ‘Tribal Fury’ so I could think about what I heard. I might be prone to hyperbole but this is honest. I had to stop and think about what I just heard, about the movement of fingers and the arrangement of sounds that happened.

As the name of the group is taken from the Madeira islands, a highly sought surfing location, caught in between the influences of Portugal, Spain and North Africa. I asked Ivan about the name and he spoke about how he identified with “this island that was its own thing, with ties to multiple places but separate.” This makes a whole lot of sense, as the music this group of musicians makes is connected to many sources and yet, they are their own self.

No one is slacking off on this album. Everyone is playing at a level that hadn’t been reached before on prior releases, albums that are by no means of the imagination products of half-hearted work. The guys in the band have been at this for a while and their efforts show, especially in ‘The Expedition’ and in the ‘Pre-Ritual’/’Ritual’ songs towards the end of the album.

The song arrangement is pretty smart, producing not a collection of songs but an overall experience that is lacking in a lot of modern ‘albums.’ After getting whalloped by ‘Tribal Fury,’ the following tracks ‘Cities of Gold’ and ‘Twilight’ allow my brain to return from the edge, as they display the grace of Patrick O’Connor and Ivan Pongracic’s respective guitar playing. Todd Fortier is great with the bass, too. It’s never a non-entity and that’s what is great about a lot of surf music bands. Schlubs (like myself) who only know three notes on the instrument, making us overqualified for most punk bands, can’t hold up towards guys like Fortier. Dane Carter, by the way? The drummer? When he’s fast, he’s a 50mm caliber machine gun. When he’s slow, he’s the heartbeat of the surf against your board. Together, these men have made definitely one of the best albums of the year.