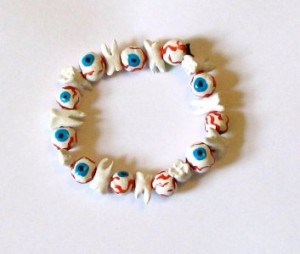 This Friday is the sixth annual Psychobilly Luau. Poinsettia is upset that she can’t go and has been sulking around the offices. She’s been visiting since we needed Bernie to come by with some of his equipment for a large landscaping undertaking. A whole back wing of Quiet Side has been recommissioned. While working with the university and the relatives that could be located, the remains interred in this wing of the cemetery will be either relocated to a different section, held in waiting until they can be replaced or donated to the mortuary and biology science departments for what studies might be funded this upcoming semester.

Because Poinsettia is out of school, she decided to tag along with her father since Loretta has been bringing young Humphrey up at the Freakshow family home. It’s kind of amazing to think that Humphrey is almost a year old. Time does fly.

“It’s total bull!” was often repeated by Poinsettia when the Luau, taking place July 13-15th at three different venues in Brooklyn, NY, was brought up. “Bea’s uncle and aunt will let us stay with them.” The reason for her missing the act is that she’s still only fifteen and will be eligible to travel to New York City on her own next year.

“I’m going to be sixteen in October. It’s total bull!”

Strange Jason, who missed out on the festivities last year (as documented here) has shared his sympathies with Poinsettia but it hasn’t made her mood lighten. It’s a shame. She recently discovered Deathany97, the feature of this week’s Tuesday uEtsy spotlight and the accessories and clothing available would have made Poinsettia the big kahuna of the Luau. 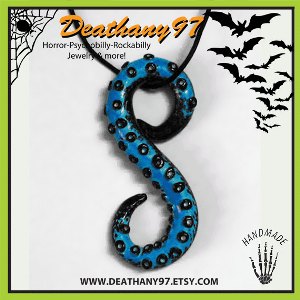 What makes this Deathany97 brand Tentacle Necklace (and the others available at the store) so special is the vibrant color choices. Rich blues, electric purples and putrid greens not just stand out but scream against a dark dress or black t-shirt, making these eye catching appendages even more inescapable. 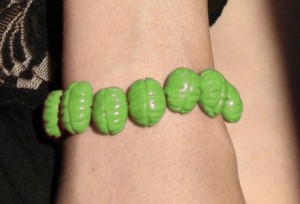 Wearing your heart on your sleeve is so 1995 Billy Corgan. These days, show off your smarts visually with a collection of brains around your wrists. Available in red, pink, rainbow and zombie, this Deathany97 bracelet allows you to give someone a piece of your mind while having plenty leftover for yourself. 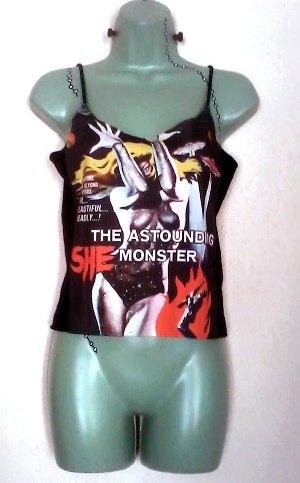 Dressing for a psychobilly event can go any which way, though there are standards and typical fashions that can do no wrong. Creepers. Rolled cuff jeans. Dresses from the fifties. Greaser pompadours, psycho spikes and bangs. These examples are heavy on the ‘billy, light on the psycho. You can switch it around with this style of tank top, showing your love for the horror on your clothing (if you haven’t already dyed your skin with some tattoos.) With a custom printed monster poster on the front, you won’t find this anywhere else. 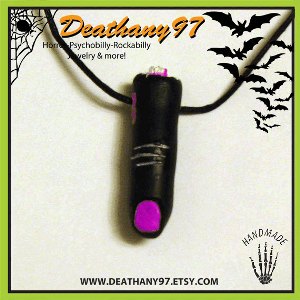 Giving the finger to someone has never been easier, and really, the gesture is one of the easiest to make as it is. Reduce the time and effort with this pink and black necklace, permanently giving the one-digit salute to whoever might catch sight of your neckline. After all, this is the ultimate form of freedom of expression.

Luau’s, by their nature, have fire and meat cooking on said fire. But since the venues – Public Assembly on Friday, The Bell House on Saturday and Sunday – probably will discourage creating fire pits in the wrecking pit. But that’s no reason for you not to dress up like a tasty bit of meat yourself. Or, if you’re into the horror business, customize this with a fedora or a nice leather glove to accent the kind of nightmares you’re going to give all the kats and kittens when you show up.

Head over to Deathany97’s etsy store and follow @Deathany97 on Twitter. Pick up what you can. If you can’t make it to the 2012 Psychobilly Luau this year, at least you can be prepared for 2013. And be prepared to make it back here next week for another edition of Tuesday uEtsy.