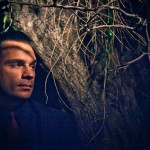 Gris Grimly, the Mad Creator, is busy at work. Recently, he has been working with Dreamworks, designing the villain for the upcomign Madagascar spinoff starring the penguins. He is known for his art and wicked sense of humor. When not publishing his own books, he has illustrated those by such authors as Neil Gaiman, Laura Leuck, Joan Aiken.

Grimly is also an accomplished filmmaker, directing both the opening to Elvira’s Movie Macabre as well as the independent horror feature, CANNIBAL FLESH RIOT. 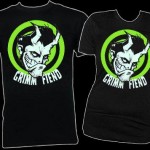 If you could design this year’s hit costume that everyone dresses up in, what would it be?

I would create a costume for my Grimm Fiend character. But it would be like the vintage Ben Cooper style with plastic apron and vacuform mask in a cardboard box. I’ve also wanted to release a club hat that would be similar to the old Micky Mouse club hats except it would have devil horns on it. All part of the Grimm Fiend line.