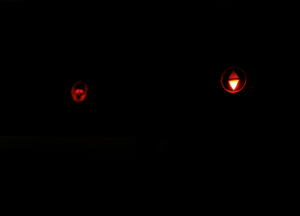 Having a fake elevator in your haunted attraction does wonders for the overall atmosphere. At its most basic use, a well-made one can help increase the feelings of isolation and being trapped in your haunt. Having it seemingly go out of control and violently plunge into the depths only adds to the fun. But making an elevator seemingly go out of control isn’t the only way to generate scares. There can be scary effects with the controls, such as the above pictured change in the floor indicator lights or, for older models, having something scary happen to the floor dial. Perhaps the automated announcement will take a sinister turn or how about a monster that pops out through the safety hatch on the ceiling? I even know of one where the elevator isn’t even designed to simulate movement. After the button panel malfunctions, the riders are ushered out only to discover they are now in a broken down, haunted version of the happy hotel they were previously walking through. One might even argue that the broken elevator’s lack of movement makes the transition that much more effective! That is, as long as guests enter and leave the “elevator” through the same set of doors.

Don’t get me wrong, almost all of your guests will know the elevator effect is fake, but a good “Hellevator” ride needs to do as much as possible to plant a seed of doubt in your guests’ minds. One of the best ways to spoil that is to have them enter through one door and exit through another. They’ll immediately figure out how the effect was done, and I think we can agree that it’s more creepy (and fun) if they aren’t sure how the effect was accomplished. You want this to be like a real elevator ride, where you enter and exit through the same set of doors.

A friend and I once rode in a “Hellevator” at the now-defunct Terror on the Wharf haunted attraction in Salem, MA. A guide lead us into the elevator and had use face the secondary door. Within a few moments, the elevator’s normal movements turned into violent shaking. On top of that, flickering red lights eventually appeared at some openings near the top, implying that we were riding straight to Hell. After we had exited from the haunt’s final scene (which the elevator had delivered us to), we immediately began discussing our thoughts on the experience. Although the ride was fun, we both agreed that the use of two doors hurt the experience. On top of that, my friend had looked over his shoulder while the guide and I were distracted and saw that the entrance of the elevator didn’t have any doors! This revealed we had not left the previous room! In other words, it completely killed the illusion for him.

But before I discuss how to accomplish such an effect, let’s look at how these illusion are created. Some “Hellevators” use implied movement, some use actual movement and others combine both methods. Implied movement can be created using moving lights, rollers (or old treadmills) scrolling a brick or stone patterned fabric in an elevator window or even animations shown on flatscreen TV “windows.” I’ve even heard of someone who uses speakers that cause slight vibrations to create the illusion of a moving elevator! As for versions that use actual movements, air–powered pneumatics and springs seem to be the most popular methods. However, the use of pneumatics can be very time consuming to set up, in addition to the fact that this method offers more potential danger.

Unlike the last two props I have discussed recently, this sort of prop isn’t very widespread at home haunts. This is because premade versions of this sort of prop are very expensive and not sold in any kind of store that your average person would visit and also because tutorials for this sort of effect are fairly rare. As you can see, most discussions on building one focus on people either sharing behind-the-scenes pictures or talking about what methods they used than actually showing a step-by-step way of constructing a “Hellevator.” The increased amount of work you’ll have to put in to build one doesn’t hurt either.

Actual tutorials do exist, but are very limited in terms of selection. This tutorial is extremely labor-intensive while this USENET post’s low budget version doesn’t move at all. That said, I am impressed by its low tech (but effective) way of implying movement through the use of lighting. There used to be a tutorial for creating such an effect in a haunted mineshaft, but that seems to be long gone. On a more positive note, searching for it lead me to this. Thankfully, there is a website out there with several tutorials on how to build a “Hellevator.” I’d even go as far to say that it is THE website to go to for those who want to add an elevator prop to their haunted attraction. Best of all, it even shows how to construct one where people enter and exit through the same doors, only to find themselves in a different room! Better still, the webmaster is currently working on a new version of the elevator (complete with tutorial), so keep your eyes peeled on the Garage of Terror for future updates.

No matter what method you use, odds are that you’ll have done enough work to make you want to use this effect more than once. With some careful planning ahead of time, you can pick the design (or designs) necessary to get the most use year after year without the effect seeming old to your guests. One way to go about this is to improve the elevator year after year. For example, using a design that only implies movement during the first year and making it actually move the next year (all while keeping the same visual design) is a great way to surprise people. So is using the “enter through one door and exit through another” technique the first year, only to wow ’em with the improved one door design the next. Using some of the in-elevator scares mentioned at the start of the article also helps. In addition to being able to be used in a haunted attraction without a set theme, Hellevators work great in haunts based around (or ones that just involve) a spooky hotel, mines, caves, trips to Hell, government installations or a mad scientist’s lab. It can act as the entrance one year, as a setup in the middle of your haunt the next, and eventually as part of the grand finale another year.

Alternately, you can rework your “Hellevator” into acting as a small spaceship (or escape pod) that sends your guests to an alien planet or as a time machine! If your steampunk-themed haunt is too heavy on undead Victorians and clockwork cyborgs, a Melies-style trip to the Moon is the perfect way to liven things up. In fact, some of the older students did something like this during one of my old elementary school’s open houses. Instead of an elevator, they used supply closet shared by two classrooms. The entrance was in one class, complete with a cardboard mock-up of a rocket build around the door. The closet was kept dark except for some blinking Christmas lights and sound effects, which eventually signaled for the door to the next classroom to be opened. Said classroom was decorated to look like the lunar surface, completed with a starry background and a cardboard cutout of an astronaut based on this iconic picture. There was even a “Kilroy was here”-style moon creature poking out from a crater that was thrown in for good measure. Now imagine how much more impressive things would have been if they had used a modified “Hellevator”…

Special thanks to the Garage of Terror for use of the image!

Bad Behavior has blocked 1329 access attempts in the last 7 days.