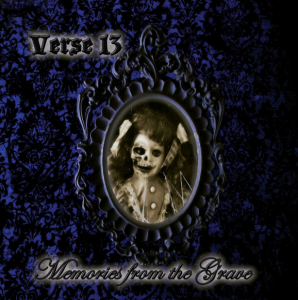 Like many of the artists covered in this year’s review series, Verse 13 is a relative newcomer to the world of spooky atmosphere music. Founded by Las Vegas, Nevada resident Mike Fox in 2010 with the release of Prelude to the Afterlife, Verse 13 quickly gained lots of praise. In fact, the track “The Netherworld Circus” was even used as a promotional theme for the TerrorKlowns comic book series. While Prelude to the Afterlife offered a varied selection of musical styles and was influenced by everything from Danny Elfman to 80’s horror movies, Memories from the Grave marks the first time Verse 13 has done an album where all the tracks are connected by a single storyline.

Things start off with the titular “Memories from the Grave,” whose eerie piano work goes nicely with the distorted child’s voice and knocking. “Voices in the Attic” has an intense, rockin’ feel that offers much potential for an area where costumed performers chases visitors to your haunt. “Silhouetted” makes great use of a spooky piano and faint female vocals, along with nice use of a gong while “Unfinished Business” makes use of pounding music (especially percussion) for another track that implies chasing or pursuit. The light piano work of “Residual” has a sinister feel and “Did You Hear That?” combines faint moans and slow ascending piano notes. “Hands Vermillion” utilizes pounding notes and percussion for its opening, which is then followed by a great combination of piano and organ work. If you’re looking for tracks that suit certain setups, “Cold Spot” is almost circus-like in feel (but still has spooky touches) while the creepy organ work that follows the drum buildup in “Villa Montezuma” is perfect for a phantom organist display. The mournful tone of “Cemetery Moonlight” is enhanced by its decidedly (and intentionally) “off” piano work being mixed with some great sound effects. The ringing bells that start “The Doll Maker” lead to a plinking music box and wordless female vocals that make it perfect for any scene involving spooky dolls.

The soundscape “Buried in the Walls” has plenty of digging sounds, along with some growls in distance while in “As Black As Pitch,” a combination of pipe organ, bells and drums goes together extremely well. “The Child’s Keepsake” mixes a music box and heartbeat, then adds a piano and wordless female vocals. Similar vocals appear in the pounding melody of “Crypt of Gypsies,” along with bells, organ work and creepy musical stings. “Unpleasant Dreams” is perfect for a haunted children’s room thanks to the sound of a crying child (and various scary effects) being used in harmony with a music box. The soft, slow musical build at the beginning is very effective at building a sense of unease. The melancholy tone created by the violin, bells and piano work of “Torn Asunder” are well-suited for any funeral scene in your haunt. “Blighted” offers more chase scene potential thanks to its scary, driven feel created through the use of bells, drums and string work. The slow piano work of “She Still Roams” is aided by the touches of distant conversations and breathing effects. “The Candelabra Dims” features both a children’s choir and wordless male vocals, and the bell work picks up with a violin and piano. As for “It Followed Us Home,” well, you’ll have to pick up a copy of the album in order to truly appreciate this one.

Memories from the Grave has numerous tracks that, while distinctively spooky, offer uses in a wide selection of spooky scenes and displays. In fact, I would go as far to say there’s not a single bad track on it. In addition to each track being well-suited to individual looping, it also works well played in a loop at your house on Halloween night. Here’s hoping that we won’t have to wait another two years for the next album, as I’m sure it will be amazing.

Special thanks to Verse 13 for the review copy!

Bad Behavior has blocked 947 access attempts in the last 7 days.