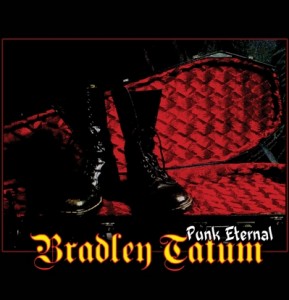 Bradley Tatutm’s prior release, It’s A Beautiful World, featured many styles, so a follow-up album putting a spotlight on his punk roots was not that farfetched. Enter Punk Eternal, the new album from Tatum. What we have here is a love letter to punk, sealed with a pin and mailed direct.

The music on this album hints at the era that may have influenced Bradley. A lot has been made of the early eighties ‘hardcore’ movement but not much has yet to be said about the era that featured bands like Screeching Weasel and Jawbreaker, which would transition the music landscape into the world of Alternative. The music could also be comparable to Danzig’s post Misfits project, Samhain, with powerful guitars, metal flirtations and dark imagery. Much of this can be seen on songs like “Witch’s Fire,” which also demonstrates Bradley’s skill as a guitar player.

Bradley plays all the instruments on this release and the arrangement is well constructed. The thirteen songs showcase Bradley Tatum’s talents as a producer. With his skills, it would be interesting to see how he would work with a full band, to see these different members of a crew follow his helm.

Some of my personal favorites on Punk Eternal are the faster numbers, with “The Trouble With Wings” standing out as a great burst of speed, energy and emotion. “I Don’t Like You Anymore” and “Young and Bold” capture the ethos of punk, the anger and attitude.

The music on Punk Eternal may demonstrate Bradley’s influences, he’s not completely separated from them. A lot of the dark industrial and metal of It’s A Beautiful World seep through. It would be impossible for him or anyone to make an album that would be indistinguishable from one in the past. It would also be fraudulent, to deny that you’ve grown past your influences. Bradley Tatum demonstrates both a strong reverence for the music that has shaped him as a musician. This is not a nostalgia act or a detour from his current situation, but a reaffirmation of his background and history. For a release with powerful dark punk, mixed in with glimpses of metal and industrial, definitely pick up Punk Eternal.