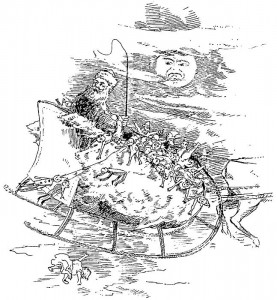 Here’s a rare holiday treat, the pressbook for the original version of Black Christmas. Even if you aren’t a fan of the film, you’re sure to love the promotional gimmicks.

Fans of our yearly Free RPG Day posts are sure to love this fan-made, Christmas-themed Dungeons and Dragons adventure.

If you need a quick and easy way to add a macabre touch to your Christmas tree, than RavensBlight has just the type of ornaments for you! If you don’t need any more ornaments, then perhaps this floating candelabra will be of more interest to you (especially if you color the white candles green and mix them with the red candles).

Are you one of the many people who were creeped out by the CGI characters in The Polar Express (the movie, not the book)? Some blame the “uncanny valley” effect, but this site has a more sinister explanation.

Longtime readers of the site know that telling ghost stories is a time-honored British tradition. So I’m getting in on the action by not only sharing an unusual ghost story involving (but not written by) Charles Dickens, buth also sharing scary stories like a zombie-themed take on “The Twelve Days of Christmas” and a short Christmas tale by Mike Arnzen.

I don’t care what the listing says, this is not a Krampus. Now the creatures depicted in these holiday wall clings are. The mock-ups of those clings in use kill me, though.

Speaking of the Krampus, Google Books has a NSFW preview of Krampus: The Yule Lord available. Those seeking other online Krampus resources will definitely find these links handy.

Speaking of zombies, zombie ornaments and zombie nutcrackers are growing in popularity. For those of us who feel zombies are overexposed, hanging up a picture of a Yule Squid is a great way to celebrate the horrordays without being too cliché. UPDATE: The original SYFY Wire links I had used in this segment no longer work. So in addition to the replacement links I used to show you other zombie ornaments and zombie nutcrackers, here’s a link to SYFY Wire’s Christmas category as an added bonus.

Speaking of cephalopods, the band Supreme Fiction is offering free downloads of “All I Want for Christmas is Cthulhu” and “Christmas for Failures.” Those with a taste for steampunk will love these takes on “Ebenezor’s Carol” by The Men Who Will Not Be Blamed For Nothing and sci-fi fans are sure to enjoy Gulag Picture Radio’s “Xmas On The Moon.” And let’s not forget Tribal Gothic’s “Winter Solstice” is available for free as well! In addition to his free regular Christmas song downloads, Kevin MacLeod also has tracks like a dark take on “Dance of the Sugar Plum Fairy” and “Ice Demon” available. Don’t forget that Mr. Ho’s Orchestrotica has their streaming version of “Arab Dance” from The Nutcracker available as well! If that somehow isn’t enough for you, 6’+ has several Christmas episodes available.

Bad Behavior has blocked 702 access attempts in the last 7 days.