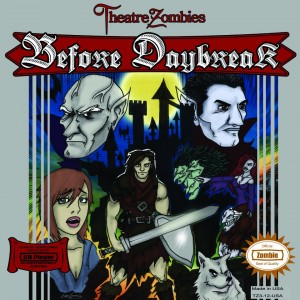 Theater Zombies are back with their second release, ‘Before Daybreak.’ Songs like “What We’ve Become,” with its catchy crowd-chanting chorus, and the haunting vocal ending of the album closer, ‘Too Far Gone’ are examples of why the Theater Zombies are a possible new powerhouse in the horror punk genre.  Here is the melodic hardcore punk AFI wishes they could remember how to play. This is punk. They can hold their own with hardcore bands and pop punk bands and wouldn’t stand out if they shared a bill with Teenage Bottlerocket or The Queers.

This release earns the drummer, Tommy Transylvania, some mad respect for pounding out his insanity on the drums. Robbie Farenheights Belmont puts out punk solos that complement Michael Van Buren’s gritty bass lines. The piston pounding of the drums, fired up by the fuel injected bass and guitars tear down the road, follow the vocal’s headlights as they point the way. The Theater Zombies has always been the vocals, and both Van Buren and Belmont blend their singing to form the fourth instrument in the band.

This band has a great amount of potential, and while I’m really wowed by this release (it’s really good), I’m really excited for the one that’s going to come after this. Listen to the start of “A Forgotten Promise.” Just a few notes starting song sets it apart from the rest of the high-octane music. There is the risk of homogeny with hardcore punk – songs all starting at 100mph end up sounding the same. I think ‘Beyond Daybreak’ mostly avoids this trap.  But, I consider this: ‘Beyond Daybreak’ is the band’s second release in as many years. They’re still introducing themselves to the world and I think they’re making great first and second impressions.

It’s actually surprised that a band of this talent and caliber is playing horror punk.”A Place For Me,” a non-horror themed song on the album, hints at a possible future for this group. They’re maybe two to four years and a couple releases away from headlining a stage at the Warped Tour or at big showing at FUNFUNFUNFest. The Theater Zombies aren’t just a great horror punk band; they’re a great punk band, period.

‘Before Daybreak’ is the Theater Zombies building a foundation sound and once set, they’re going to experiment. THAT is when you’re going to regret that you weren’t a fan of them from the beginning. This band might just take over the world. Even if they break up or change their name and become a straight punk band, leaving the horror business behind, you’re going to want to follow these guys and their career. You’ll be glad you did.

Bad Behavior has blocked 3491 access attempts in the last 7 days.