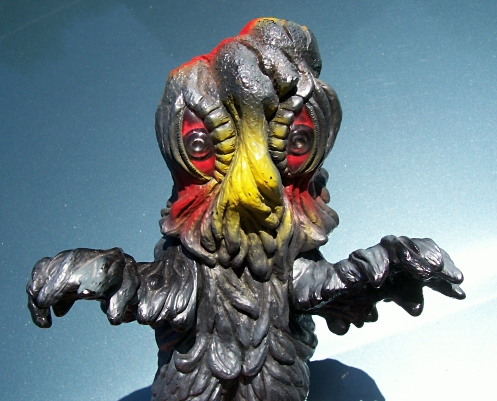 Originating from the Dark Gas Nebula in the Orion Constellation, Hedorah is a strange case in the world of Godzilla fandom. Having first appeared in 1971’s Godzilla vs. Hedorah (better known in America as Godzilla vs. The Smog Monster), it took decades before Hedorah made a second appearance in the franchise due to the poor reputation of its debut feature. Despite that, Hedorah has been popular enough to be featured in several literary works, both standard books and comic books, in addition to appearances in numerous Godzilla video games. So whether you love or hate the Smog Monster, here’s a small collection of trivia that’s sure to interest you:

1. Hedorah was portrayed by Kenpachiro Satsuma in his first appearance, who also was the man in the original Gigan suit and played Godzilla during the Heisei series.

3. In addition to the differing pronunciations of “Hedorah” and different lyrics for the song “Save The Earth,” the American and International/Japanese versions of the films had slightly different endings! You see, American International Pictures removed a brief scene implying that another Hedorah had formed for the US version.

4. The previously-mentioned ending wasn’t just a gimmicky shock finish, either. Director Yoshimitsu Banno had planned on making a direct sequel set in Africa. However, producer Tomoyuki Tanaka was so displeased with the film that he stopped any chances for a sequel being made.

5. The name “Hedorah” is a play on “hedoro,” the Japanese word for “sludge.” The creature’s original name was supposed to be “Hedoron,” but those plans changed when the Japanese superhero series Specteman introduced a pollution-spawned creature by that name (who is known as “Hedron” in the English dubbed version).

6. Did you know that Hedorah actually some basis in reality? No, I’m not referring to Yoshimitsu Banno coming up with the idea for Hedorah after visiting a polluted beach. What I am referring to is how mixing concentrated sulfuric acid with sugar will result in a growing mass of black, acidic foam and noxious fumes similar to Hedorah. As you would expect, this sort of experiment can be dangerous and is not to be tried at home!

7. Hedorah made a surprise reappearance in Godzilla: Final Wars, with a greatly increased height and weight (120 meters tall and 70,000 tons compared to the original version’s 60 meter height and 48,000 ton weight). Sadly, most of footage featuring Hedorah was left on the cutting room floor, either due to time constraints or the director’s alleged dissatisfaction with how the new costume looked.

8. There seems to be some confusion in America as to who wore the Hedorah costume in Godzilla: Final Wars. Some sources credit Kazuhiro Yoshida, who also portrayed as Gigan, while others claim that Hedorah was played by Toshihiro Ogura (who also portrayed Ebirah and Anguirus).

9. Hedorah appears on the cover art for the Frank Zappa album Sleep Dirt, presumably due to Zappa’s love of b-movies.

10. An all-new kaiju called Neo Heodrah appeared on the television series Godzilla Island. To help differentiate it from Hedorah (who also appeared on the show), this creature was depicted as a recolored version of Hedorah with fungus-based powers.

11. Hedorah was scheduled to have another relative, Dethla, appear in the proposed IMAX film Godzilla 3-D (which would play out like a glorified remake of Godzilla vs. The Smog Monster). This project seems to have mutated into Legendary Pictures’ upcoming American Godzilla movie (as evidenced by Banno being one of the film’s producers), so perhaps we haven’t seen the last of Deathla after all.

12. The above link also notes how Hedorah’s eyes have a rather…um…”unique” inspiration. A not for kids inspiration…

UPDATE: Although Godzilla did not face Deathla in Legendary’s Godzilla, Yoshimitsu Banno has expressed his desire to make a sequel to Godzilla vs. Hedorah some day.

Special thanks to Bogleech for use of the image!