Traveling through Vermont? Watch out for King Kong! 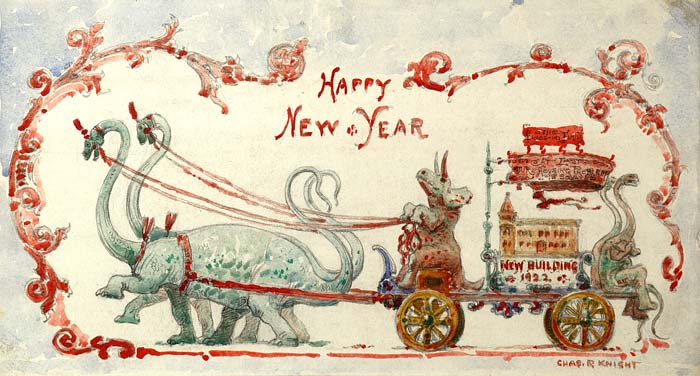 Happy 2013! To celebrate, I thought I’d share this special New Years’ card. However, I didn’t choose this card simply because it depicted dinosaurs. I chose it because it was created by none other than Charles R. Knight. Even if you don’t recognize his name, it’s virtually guaranteed that you’re already familiar with his work (if not had your childhood ideas about dinosaurs shaped by his work).

Charles R. Knight had a deep and lifelong appreciation for artwork depicting animals. His early days of copying book illustrations as a small child led to him attending art school and sketching animals at the Central Park Zoo. This in turn led to him visiting the American Museum of Natural History’s taxidermy department in order to study muscular structures, where one Dr. Jacob Wortman tapped him to aid in the reconstruction of an Elotherium based on fossils. Using a combination of what the fossils looked like, modern pig anatomy and some speculation, the end result so impressed Dr. Wortman that Knight was hired to create more paintings of prehistoric animals. His work was a hit and eventually he was creating more paintings for other institutions. But he wasn’t “just” an artist. He was even asked to both write and lecture about prehistoric life.

When it came time to bring The Lost World to the big screen, the model of the Agathaumas was based on Knight’s restoration. Similarly, the stop-motion dinosaurs in King Kong were based on his paintings. His work has even influenced legends of the science fiction genre like Ray Harryhausen and Ray Bradbury! On top of that, he even appeared as a character in the 1998 IMAX film T-Rex: Back to the Cretaceous

Naturally, his beautiful artwork found its way into numerous books (both scholarly and those aimed at children). I know what some of you are thinking. “So Charles R. Knight must have been the guy who did the illustrations in the book about dinosaurs that was used in the American version of King Kong vs. Godzilla, right?” Actually, that’s not the case. The illustrations in Darlene Geis’ Dinosaurs and Other Prehistoric Animals were created by R.F. Peterson. Getting back on topic, the popularity of his work helped further popularize the then-popular, inaccurate idea that dinosaurs were lumbering brutes and this undoubtedly influenced countless film depictions over the decades. This is not a slight against the man, as he was only able to create his works using the scientific information of the day. Not only that, but he actually championed some ideas that while considered inaccurate in his day, turned out to be correct years later! Besides, I’m sure I’m not the only one who looks back fondly on the way dinosaurs used to be portrayed…

Bad Behavior has blocked 1747 access attempts in the last 7 days.