Have A Happy Valenslime’s Day!

Back in the 90’s, long before the Kardashians, E! Entertainment’s primary focus was on the industry of entertainment, covering the day-to-day happenings of television and film in a manner that didn’t always insult your intelligence even though it had a trashy-glamour to it. They usually covered major industry events, one such installment, being either ‘Wild’ or ‘Live’ on the French Riviera,” when they usually covered the Cannes Film Festival.

It was during one of those programs that I first saw Lloyd Kaufmann, Srgt. Kabukiman NYPD and the Toxic Avenger, flanked by a lovely Tromette whose name I can’t remember. In typical, attention-seeking publicity, The Troma Team took then-E! News host Steve Kmetko and transformed him into DOLPHIN MAN. Afterwards, Llloyd suggested that they make DOLPHIN MAN a movie and that the sequel would be DOLPHIN MAN: SON OF A BEACH. You actually see Dolphin Man in Citizen Toxie: The Toxic Avenger 4.

Because of this first instance where I was introduced to the bizarre world of Troma, I was glad to help when they wanted to spread the word about Occupy Cannes, their follow up to 2002’s All The Love You Cannes. In All The Love You Cannes, Troma offered a view on how its operates, often on a shoestring, no-real-sense-of budget to compete for attention and notoriety at the Cannes Film Festival. The Film Festival is important because it offers a showcase for movies to attain critical and commercial interest, where people can sell their films to distribution companies. Troma uses this as a hub to find distribution for their movies, and will do so this year for Return To Nuke’Em High, the recent production from Troma (directed by Lloyd Kaufman.) 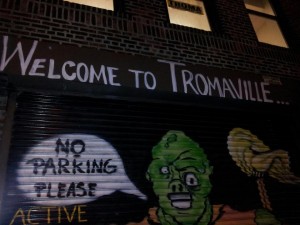 In the above video, you can see the layout of the Troma Office. I showed up late in the day and each desk still housed one of the workers who have committed to keeping this near-40 year old independent institution alive. They were still there when I left afterwards. These are people who have committed themselves to not just Troma, but to the idea of alternative, independent entertainment.

Lloyd Kaufman was in the middle of editing Return to Nuke ‘Em High before he left to sit at his iconic desk to speak a little bit about Occupy Cannes and the IndieGoGo.com campaign to help fund their operations over in Cannes. At the time of the writing, they have raised close to half of their estimated budget, but only have until the end of the month to reach their goals.

IndieGoGo is unlike Kickstarter, the latter of which denying any funding unless the goal is set. Because they went through IndieGoGo, Troma will still be partially funded if they don’t meet their goal. But a greater percentage will be taken out at the end. Not to mention that the Cannes operation isn’t completely funded. Occupy Cannes a movie might not occur. If it does, it’ll come to a loss of Troma’s already tight coffers.

Cannes, I think, is personal to Troma. Troma has history with the Cannes Film Festival and it’s forever going to be its battleground. They’ve created Tromadance, a truly independent counterpart to the bloated, corporate version of Sundance. But instead of picking up and moving on to create a version opposite of Cannes, Troma is staying to fight. Troma has been going to Cannes for decades and to give up is to give up a part of Troma’s history.

It’s a case where the only way to lose is to quit. The more that Troma is a thorn, a disruptive voice against the corporate interest of those who have wealth, money and influence, then the more the spirit of independence lives on. I think that’s why they’ve titled this endeavor Occupy Cannes, similar to the movement to raise awareness and disrupt the status quo.

Will it work? Who knows. Probably not but sometimes, it doesn’t matter if it will or it won’t – just that you bothered to try and change it. 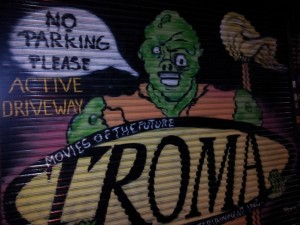 Bad Behavior has blocked 3299 access attempts in the last 7 days.