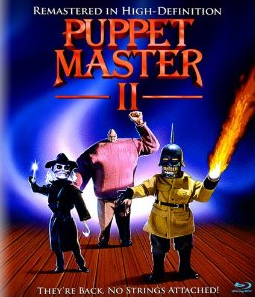 Things haven’t gone so well for the survivors of the previous film. To be more specific, one has been mysteriously killed and the other is now insane. When a group of parapsychologists is sent to the Bodega Bay Inn to investigate, they soon encounter murderous living puppets…and the mysterious new owner of the inn. What they don’t realize is that he’s really a disguised Andre Toulon, brought back to life by his creations using the last of the serum they need to live. And he needs brains to make more of it. Human brains. Suddenly the mysterious death that sparked the investigation doesn’t seem so mysterious anymore. And the body count is only beginning. As if that isn’t bad enough, Toulon has special plans for one of the female investigators…

This is the first time I truly watched Puppet Master II. I say this not because of the new transfer, which I’ll discuss later in this review, but because of the way I used to see it. I used to occasionally turn in to random parts of the film back in the days when the Sci-Fi Channel constantly reran it (and didn’t have a goofy-sounding name), and seeing it from start to finish in a single was quite a revelation. I’ve come to realize how this is actually the last film of the series to maintain any sort of good continuity. Although the next installment is regarded as the best installment by numerous fans (including myself), I do have to admit it doesn’t connect to the first two films very well. The flame-throwing puppet Torch is a welcome addition to Toulon’s crew and it’s a shame he more or less vanished from the franchise after this movie. Seeing all the great stop motion animation, including the effective opening sequence featuring Toulon’s revival, has made me realize just how much I miss the old days of Full Moon. I also enjoyed the movie’s references to classic horror films, such as Toulon’s Invisible Man-style disguise and his alias of “Eriquee Chaneé” being a reference to both Lon Chaney and the Phantom of the Opera.

Having seen the films out of order, it was quite a shock to see the normally kind-hearted Andre Toulon portrayed as a villain. Even though he received little characterization in Puppet Master, it’s hard to accept that a man who killed himself to keep the secret of bringing inanimate objects to life away from the Nazi would be so willing to kill innocent people just to keep himself alive. I know he mentions the afterlife not being what he expected, but he isn’t even shown struggling with his conscience over the matter. My own personal nerdy explanation is that it’s due to brain damage from his death coupled with the influence of the puppets. You see, it’s implied throughout the series that the puppets’ behavior is influenced by the personality of their puppet master. Since the person controlling them in the first movie wasn’t exactly a nice guy, it’s not unreasonable to assume his influence still lingers on them and is effecting Toulon.

The Blu-Ray presentation of this 88 minute movie really shines thanks to its beautiful high-definition, 16:9 widescreen transfer and 5.1 surround sound audio track. Although the audio sounded fine to me, I should note there are those who have issues with it. There’s no shortage of extra features: an all-new introduction to the film by Charles Band, a commentary track, the original making-of “VideoZone” segment from the film’s VHS release, a kill scene montage, a 90’s commercial for Puppet Master action figures (presented in fullscreen) and numerous trailers for other Full Moon titles. Said trailers are for Puppet Master, Castle Freak, The Dead Want Women, Zombies vs. Strippers, Demonic Toys 2, Evil Bong 3, Gingerdead Man 3, Killjoy’s Revenge and Puppet Master: Axis of Evil.

I know I’ve been pretty laid back about Full Moon’s new direction in my past reviews, but watching these old films has been slowly changing my attitude. Comparing their vintage and recent output side by side for so long has been very enlightening. I’d love to go into more detail about it. but I’ll have to save that for my upcoming review of Puppet Master III instead…

UPDATE: My enthusiasm over the widescreen transfer might be misplaced. Check here for more details.