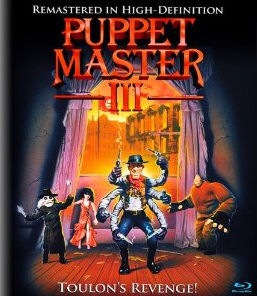 The year is 1941. The place? Berlin. Andre Toulon is using his puppet show to express his disapproval of the Nazis and sadly, a member of the party catches him doing so. To make matters worse, the Nazi in question is part of a secret project to create an army of reanimated soldiers and realizes that Toulon’s puppets could be of great use in it. Soon the puppet master and his wife are dragged into a desperate battle to save themselves and keep Toulon’s secret reanimation formula out of enemy hands. Along the way, we also learn the tragic origins of Blade and Leech Woman…

This movie holds a very special place in my heart, as it was the first installment of the Puppet Master franchise that I ever saw. During many childhood summer vacations, our baby sitters would take my little brother and I to the local video store to rent movies. Naturally, I usually made a beeline to the horror section. Naturally, the cool puppets soon grabbed our attention. Although the sitters weren’t entirely comfortable with the idea of us renting the movie due to the rating, our argument that the film’s monsters were killing Nazis rather than innocent people finally won them over. Thank goodness that worked, because we were in for a real treat. To this day the film is regarded as the best of the series and was so well received that the puppets spent the majority of the franchise pitted against evil beings rather than acting as the villains (which permanently sidelined the story hinted at during the conclusion of Puppet Master II). Unfortunately, the film also introduced continuity errors to the series, such as having Toulon active in 1941 when the first film established that he killed himself in 1939! Such errors would repeatedly pop up as the series went on, but I must admit that the films were usually entertaining enough to make you forget that (at least for a little while).

But after the fifth film (which was originally supposed to be the final chapter), things started to go downhill for both the series and Full Moon as a whole. The loss of their partnership with Paramount reduced their budgets to next-to-nothing, while the death of special effects maestro David Allen drastically changed the traditional look of Full Moon’s output. There have been several attempts to create a new puppet master to guide the puppets, but none can compare to the late Guy Rolfe’s take on Andre Toulon. It’s been speculated that the decision to set the most recent Puppet Master films during World War II are an attempt to recreate the glory days by (seemingly) copying what made the third film work. But sadly the end result is more cargo cult than it is successfully recreating a recipe. I’ve tried sticking by the company due to my fond memories of the numerous nights spent watching Full Moon movies after having been so impressed by Puppet Master III, but lately even that doesn’t work as well as it used to. It’s rather telling that most of my positive reviews for Full Moon’s more recent fare have been due in part for my going into them with incredibly low expectations. My most positive reviews have been reserved for reissues of their older material. And while the company does have some “new old” films in its archives, such as the Pulse Pounders segments and The Primevals, but that can only go so far. Let’s face it, they can never go back to the good old days.

With all the movies getting released on home video with their proper widescreen aspect ratio after only being available in cropped fullscreen transfers, it’s all too easy to forget there were films shot in fullscreen in mind. Although the original Puppet Master was originally supposed to play in theaters, the rest of the series was made with the knowledge they would be released directly to video. As much as I’d like to think that the films were shot in widescreen and cropped like the first movie, I highly suspect that the widescreen transfers for the rest of the classic Puppet Master films are cropped from their original aspect ratio. The example shown here should show why this is a very bad thing. Such a scenario would be completely unacceptable, especially since the original versions of the films aren’t included on the same disc. It is a small consolation that they are available on certain DVD releases of the films. Full Moon says they take fan demand very seriously, so I urge everyone reading this to write in to them to demand that the aspect ratios of the films (and original soundtrack format) remain untouched.