I Got The Spirit But Lose The Feeling 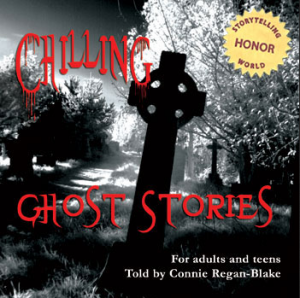 The story behind Chilling Ghost Stories is quite interesting. It begins in the early 70’s, when cousins Barbara Freeman and Connie Regan decided to quit their jobs and make a living from telling stories after receiving much acclaim while telling stories to audiences while working at the same library. Although there was some struggling at first, their hard work and talent eventually paid off. In addition to countless live performances, “The Folktellers” also released a book, several albums, home video releases and even a stage play! Four years after the two parted ways for solo careers in 1995, Connie (now Connie Regan-Blake) released an album called Spirits Walk that included re-recordings of two stories she had originally performed in the 1983 Folktellers album Chillers. Long after the CD went out of print, she reissued it under the new title Chilling Ghost Stories in 2009.

In “Rag Doll” a new teacher in an isolated rural community learns the reason why her employers seem so eager to make sure she doesn’t stay after school. “Two White Horses” is an allegedly true tale of a return from the grave that’s also notable as being Connie Regan-Blake’s signature story (along with being the first scary story she ever told). I’ll let her explain further: “From that first telling – almost 4 decades ago I could feel the power of it, especially since it is a true story. Over the years, it has continued to grip teenage and adult audiences. I once told it to 20,000 people from the main stage at the Winnipeg Folk Festival – an amazing experience – connecting with that many people through a simply told story. That telling was also broadcast live across Canada on their national radio (I even had someone recognize my voice from that radio broadcast on a plane when I was flying back to the states).” Next come the two stories that originally appeared on Chillers. A young woman discovers the shocking secret of her seemingly charming suitor in “Mr. Fox” while in “Mary Culhane,” the titular heroine has to match wits with a living corpse. In the final tale, “The Veil,” a man must go through several ordeals in order to save his wife and child from fairies. Yeah, I said fairies. Contrary to their popular depiction as friendly little winged beings, the fairies of legend tended to be much larger and not so nice (in addition to having more complicated origins than one might expect).

Back when I reviewed Great Classic Ghost Stories, I noted how the term “ghost story” can be applied to scary stories in general, stories about ghosts that aren’t necessarily scary and scary stories about ghosts. The tales on this disc tend to fall into the first two categories. They also are an interesting mix of American, English, Irish and Scottish stories with more of a folklorish feel than the usual sort of tales you find on other horror audio compilations. But you know what? I like this change of pace. As much as I love Poe and Lovecraft, I find it far more thrilling to hear new (well, new to me) material rather than listen to the same old stories over and over again. Although some of them have plot elements similar to certain stories that horror fans might be familiar with, I was pleased to find that they make enough changes to keep things interesting.

I’ve heard of people having the ability to make it sound like they’re having personal, one-on-one conversation with the listener despite addressing multiple people before and I’ve always rolled my eyes at such claims. Especially when people made such comments about narrators for audio books or radio DJs. They’re only addressing a single microphone, of course they’re going to sound like they’re only talking to you! But after listening to Chilling Ghost Stories, I finally understand just how wrong I was. With her slight Southern accent and clear, pleasant vocal skills, Connie Regan-Blake has a great voice for country tales. She’s no slouch when it comes to other kinds of stories, either. I love how she is able to draw listeners in with her descriptions. For example, her detailing of the trip to the graveyard in “Two White Horses” is so good that you can practically see it and smell the honeysuckle. Similarly, the description of blueberry picking methods in “Mr. Fox” draws you in and never feels extraneous. She also makes asides at times that make it seem like the listener actually knows the characters in the story. On top of that, Connie Regan-Blake gives each character their own distinct voice without drifting into audio drama territory. Her voice for the corpse in “Mary Culhane” is especially creepy.

Chilling Ghost Stories offers over an hour of audio entertainment with crystal clear audio quality, with Paul Reisler’s catchy music playing at the open and/or closing of each story (except for “Rag Doll”). Although short, the liner notes offer a wealth of information about each story (including details about their original notes sources and influential tellers of each tale). I very surprised to learn how “Mr. Fox” is referenced in Much Ado About Nothing as being an old story!

So if you’re looking for a way to liven up an evening, put this in your CD player and turn down the lights. As the original release is long out of print, the only place you can buy Chilling Ghost Stories is through Connie Regan-Blake’s official website. She still tours to this day, so be sure to catch one of her live performances if she has one scheduled in your area. Trust me, you won’t regret it!

Special thanks to Connie Regan-Blake for the review copy!

Bad Behavior has blocked 1174 access attempts in the last 7 days.