This is the view from where I work. 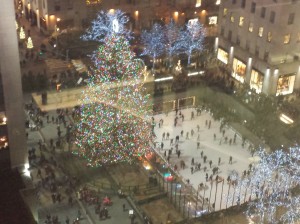 While I would like to say that sporadic writing for a blog and curating a weekly podcast of monster music would be a way to make a living, truth is I have to take my alter-ego out in the world and do office work. Lately, I’ve been doing some temp work near Rockefeller Plaza.

I was around when the tree arrived. Scaffolding was quickly build around it. It allowed for workers to stand steadily while attaching lights but also as a way to obscure it from the tourists and office workers. It wasn’t a tree but another construction project in New York.

On the 4th, they held the “tree lighting ceremony.” We were warned that entry into the office after 6pm would be complicated, as hundreds of people were expected to attend the event. They started to fill in the designated, barricaded areas around 5pm, even though the actual ‘lighting’ wouldn’t happen until 9. If you didn’t arrive in time, you were put out in front of 30 Rockefeller Plaza, down 5th Ave, in front of the Saturday Night Live studio. Those late arrivals were penned in to stare at a giant big-screen of the huge tree that was out of sight but just around the corner. Spending four hours in the cold to watch a television. I didn’t understand the appeal.

The office here was nice enough to throw a party in conjunction with the lighting event. Food. Drink. An excuse to stay late and NOT work. I talked with a few of the coworkers and ate some of the sushi that was on hand. I watched a couple of the performers that NBC had contracted to show up and “play.” Mary J. Blide sang. 90’s R&B star-turned-movie score-millionaire Babyface played. The Goo Goo Dolls pretended to strum their guitars. It was fake. It was boring and I was out of there by 7 before they flipped the switch and the lights came on.

But, people get excited for this ridiculous shit. It’s completely absurd to wait to see lights turned on, but I’ve done some pretty far-fetched stuff in my time; granted, nothing akin to waiting four hours behind a metal barricade to see the equivalent of the world’s biggest Clapper in motion, but I figured if someone would think taking three trains and a taxi to see a scary-surf band play in a bowling alley is beyond the fringe of audience comprehension.

If anything that this season teaches me is to be tolerant of other people’s “stupid” behavior. If you think it’s the bees knees to stand out and watch Mariah Carey lip sync to “All I Want For Christmas (Is You)” as she stands out on the ice rink in Midtown Manhattan, well–may the lord bless and keep you….far away from me.

Bad Behavior has blocked 799 access attempts in the last 7 days.