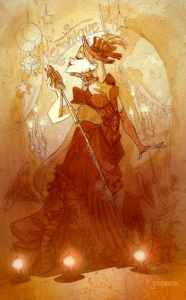 The woman in the above image by famous steampunk artist Brian Kesinger is none other than Veronique Chevalier. If you’re into the steam scene, then you are certainly no stranger to her humorous songs and extravagant performances. One year before she released her debut debut album Polka Haunt Us (and two years after she made her first appearance onstage), she noticed there were no songs related to the Festival of Lights that related to horror or the supernatural in any way. Considering how the dreidel in the famous song is made a clay and golems are made of the same material, you would think someone would have recorded a parody version (especially given the number of lyrics for such an effort being available online). As a result, “Bubbe’s Hannah Cat (Hanukkat)” was born!

The song, which deals with a young boy’s “Bubbe” (the Yiddish term for “Grandmother”) and her magical cat is available as a free download at archive.org and the lyrics are available at the FuMP (Funny Music Project). Once you hear it, you’ll understand why it was voted “Best Holiday Song 2007” on Mad Music. Although I have yet to find examples of anyone else following Veronique Chevalier’s lead, I’m sure other such works will eventually turn up. Given her constant output, it wouldn’t surprise me if she has a few more holiday songs up her sleeves…

Special thanks to Veronique Chevalier for use of the image!

Bad Behavior has blocked 1815 access attempts in the last 7 days.