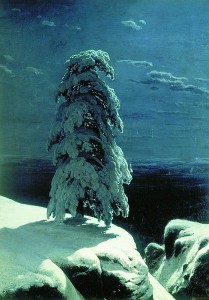 To borrow a phrase from Veronique Chevalier, Ghoultide Greetings and Hapless Horrordaze! I hope you enjoy the above image; it’s a painting called “In the Wild North” by Ivan Shishkin. I think it perfectly captures the duality of the season. If you look at it one way, it’s a beautiful winter’s night. But if you focus on the way the tree is slumped over, it can also seem very depressing. No matter how it makes you feel, I hope the following can bring you more cheer:

Our old pal the Krampus has gotten more and more popular in America as the years go by. Not only is there now a cocktail named after him, but there’s also clothing (including the traditional ugly sweater), stuffed dolls, a music album, a short film, greeting cards, stockings, gift wrap, ornaments, playing cards, various books and even a latex mask based on the horned terror.

In addition to the Krampus, other Christmas beasts have been discussed here before but somehow we missed discussing the Yule Lads (along with their flesh-eating Yule Cat) and the Joulupukki. Although both the Yule Lads and the Joulupukki were originally more monstrous in their early days, modern depictions show them as being Santa Claus clones (as you can see in those linked Wikipedia articles). How boring!

If you want to put the scares back into Christmas, you can make some spooky ornaments or “Rotoff the Deadnose Reindeer.” This article will also be useful for those trying to have a Scary Christmas. Alternately, you can turn this year’s Christmas decorations into next year’s Halloween decor with these handy links. If you’re not artistically talented, these printable pendants can be used as ornaments while these are a great way to spice up stockings.

Are you one of those people that wants to support small businesses, but always seems to forget to do so around Christmas? Fear not! You can help the little guy by buying Christmas cards from Toxictoons and using the H.P. Lovecraft Historical Society’s gift guide (along with their snazzy gift bags).

If you want more Lovecraftian Christmas goodies, there are Cthulhu-themed ornaments to be found online.

Don’t you just love it when your favorite websites do special Christmas-themed posts? The official Pumpkinrot blog has some beautifully dark holiday pictures, while Head Injury Theater and the Mad Martian have some hilarious goodies posted on their respective websites.

Remember how Winter’s Majesty was supposed to be the final installment of Nox Arcana’s winter trilogy? Well, it turns out that’s not quite true. Recently Nox Arcana announced plans to release a new Christmas EP every year, starting with Ebonshire.

On top of that, Strange Jason tipped me off about Thee Icepicks’ “Christmassacre (ft. Wayne Werewolf and Keith Sawyer)” and Atomic Mystery Monster told me about Dulcet Jones’ “The Drums of December” and Priscilla Ahn’s dark take on “Deck The Halls.” And don’t forget about our podcast’s recent holiday episodes!

Speaking of sounds, Big Finish Productions has special previews of their Dark Shadows and The Confessions of Dorian Gray Christmas specials available on their SoundCloud page, along with a special message from the Sixth Doctor and Mel.

Despite the name, O, Creepmas tree has nothing to do with the annual Creepmas celebration. Instead, it’s a great site dedicated to showcasing unintentionally disturbing Christmas tree ornaments.

Bad Behavior has blocked 4429 access attempts in the last 7 days.