“Meanwhile some dude is saving up to put monster truck tires on his van but can’t because his rent is too high. That’s the world we live in, and it sucks.”

It’s clear that The Mangled Dead are appreciated here, having written a blurb about the band once or twice on this site, as well as featuring them on 6ftplus. The lo-fi punk band is refreshing in its sound, one that is raw, powerful and unrefined – like a shotgun blast from the center of the earth, right to the face. This is a band where FTW is not the joyous exclamation of ‘for the win,’ but that original sentiment of ‘fuck the world.’ The frontman and founder of the band, Ron Rochondo, answered a few questions about the band’s origin, it’s attitude and what can be expected out of 2014.

How did The Mangled Dead come about?

It’s a bit weird and complicated, I suppose. It started as a sort of solo project I would do when I was trying to let off a little steam or break the monotony of things. I wanted to make it really nasty and shitty, and not care if the performance or recording was good. Also to get a chance to say “fuck” and “shit” a lot in some songs.

Grace Bones did vocals with me back then, and the songs came out real cool, but all we did was yell and bitch the whole time, so she bailed. After that I didn’t do anything with it for a while until it became more of an actual band. It was still kind of a “who gives a shit” thing to do, just something we could work on without having to think too much and just have fun. Joe and Carter (From Ice Dragon) helped me out then, Joe and I put down most of Hate Humans in one night, as you can probably tell… As of right now, it’s a full on kick ass band. Playing shows, recording new songs as a proper band, takin’ it out and choppin’ it up, all that. We have Chazz on bass, Aaron on Drums and John on Guitar. Shit is really starting to heat up.


The Mangled Dead’s recordings have a distinct lo-fi, fuzz-heavy sound. What motivated the band to choose this sound?

Beer, mostly. Then definitely the cassette 4-track we record on. I love all the old rehearsal space style recordings, usually done on 4-track, that punk bands used to have. Now everyone is all slick as fuck and wants to record like Blink 182 but have the street cred of Amebix, if you get what I mean. We’re still using for the new recordings, so they should sound about the same roughly. 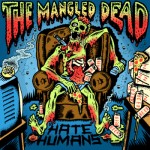 Ugliness seems to be a core theme with the band. The cover art to ‘Hate Humans’ features a decaying corpse, and hideousness is readily at hand for the songs “Mutated Dracula” and “I’m Disgusting.” Even the band’s name, The Mangled Dead, invokes this idea if a repulsive visage of a disfigured cadaver. Is there a reason behind bringing this ugliness to the forefront, into the spotlight?

Really good looking people are always fucking annoying as all hell, aren’t they? I like the idea of them being eaten by a half-rotted, zit-covered, smelly old creep with bad teeth and psoriasis. The greatest thing I can imagine would be a “nerdy”, “loser” kid with a denim vest and a Mangled Dead patch pouring vomit all over the “hot girls” at his school.

There’s an attitude prevalent in your music that, while not nihilistic, expresses a healthy “Fuck You.” It’s not to anyone in particular but towards existence itself. “Hate Humans” talks about how abject destruction of the species is something humanity had coming, and the singles like “I want to watch you die” conveys a disdain for life. What’s the impetus for this idea in your music?

I guess I’ve always been like that, so lyrically it comes out. A glass-is-half-empty kind of guy you could say. And yeah, definitely FTW. Who needs it? Like I’m sure anyone reading this is cool, automatically, because they are seeking out and supporting underground music sites and bands and probably do a bunch of other good shit too. You know, the 0.01 percent of cool people in the world.

But the other fucks, those old rich women that talk in fake British accents and say things like “I want to speak to your manager!”, and townie idiots that think anyone not wearing a baseball hat and talking about sports is “a fag”. Rich yuppies that don’t do anything good with their money, you know what I mean? They don’t buy records, they don’t buy dvds, cool old cars, frisco choppers, drum sets, guitars, monster masks, swords, skateboards, etc. They just paint their houses beige and buy practical cars and shop at high end department stores, watch cable, listen to whatever’s on the radio. A complete waste of the money they have. Meanwhile some dude is saving up to put monster truck tires on his van but can’t because his rent is too high. That’s the world we live in, and it sucks.

There’s humor in both the song and video for “Frankenstein Pays The Rent,” how grave robbing and body snatching covers the rent. Will there be more songs displaying this clever sense of humor?

Definitely. We are getting a little more “serious” with some of the new stuff, but just a little, and there will always be a place for campy horror in The Mangled Dead. We’re a buncha goofballs anyway.

Do The Mangled Dead have plans for 2014?

Oh yeah. Trying to finish up a few more new tunes and then we should have a new album ready. Play some shows for sure. I would love to do a couple more videos too, and maybe even a short film if the planets align. Who knows. If all else fails we can always just drink beer and make stupid songs.

Like what you’ve read or what you’ve heard? Find The Mangled Dead on Bandcamp, Tumblr and Facebook. Tell a friend.

Bad Behavior has blocked 855 access attempts in the last 7 days.