Help Us Win A Rondo Award!

The Ghost of Slumber Mountain 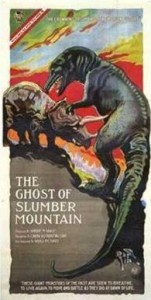 Jack Holmes decides to entertain his visiting nephews with the story of the time he went to Slumber Mountain with a friend of his. But this was no ordinary camping trip. His friend had noted how an abandoned cabin there once belonged to a hermit named Mad Dick, whose ghost is said to haunt it. That night, Jack sneaks off to investigate and find a strange device that resembles a telescope inside. When the ghost of Mad Dick appears and shows him how to use the telescope, he finds himself looking back in time and seeing various prehistoric creatures. But as it turns out, they can see him, too…

Despite being in the public domain, this film is nearly impossible to find on home video. This is presumably due to it being a silent movie that runs under 20 minutes long and because (in my opinion) most so-called “public domain” outfits seem to be more concerned with swiping transfers of the same pool of films from each other than actually bringing new material to the table. It’s a shame, as there’s plenty of stuff that will interest genre fans. In addition to the brief appearance of Mad Dick’s ghost (rumored to be played by Willis O’Brien), there’s an apatosaurus, dueling triceratops, diatryma and a tyrannosaurus. Thankfully, interested parties can find it online and a restored version occasionally shows up on Turner Classic Movies every so often.

The Ghost of Slumber Mountain has long been surrounded by mystery and misinformation. Some sources claim it was released in 1918 while others say it was 1919. Is the beast at the end an misidentified allosaurus or tyrannosaurus? As you can see from this old copyright listing and this vintage article publicizing the film, it was a 1919 release and the dinosaur is indeed a tyrannosaurus. As you may have noticed in that last link, special effects artist Willis O’Brien is given zero credit for his work. Instead, producer (and lead actor) Herbert M. Dawley claims to have done all the effects. Not only that, but he actually claimed to have invented the concept of stop motion animation (he didn’t) and even took out a patent on it! Not helping matters was his laughable explanation that he used giant sized model dinosaurs for the film. Dawley is also infamous for editing down the film from its intended 30–45 minute running time down to the short version we’re all familiar with. Some sources claim that some of the deleted scenes found their way into Dawley’s 1920 film Along The Moonbeam Trail, but a quick look at the film in question shows that’s not the case.

While some modern critics might find the effects primitive compared to O’Brien’s later work in The Lost World and King Kong, I found them to be quite enjoyable and much better than one might think. Let’s not forget that this is the first film to combine stop motion animation and live action footage, in addition to having models made under the supervision of paleontologist Barnum Brown (the man who discovered Tyrannosaurus rex)! The success of the film also led to O’Brien being able to get the famous silent adaptation of Sir Arthur Conan Doyle’s The Lost World made. This also resulted in Dawley suing over the supposed patent infringement, although there is some speculation that this was actually due to O’Brien’s famous demo reel for The Lost World using models or deleted scenes from The Ghost of Slumber Mountain. Whatever the exact reason was, the lawsuit ultimately went nowhere and the classic film was eventually made (which led to numerous other genre films). That alone should convince you to see the movie that started it all.